The Irish Citizens' Assembly has voted overwhelmingly in favour of abortion. (Picture: RollingNews.ie)

THE Irish Citizens' Assembly has voted overwhelmingly in favour of abortion in a landslide vote.

The Assembly is a body comprising the chairperson and 99 citizens, randomly selected to be broadly representative of the Irish electorate, established to consider some of the most important issues facing Ireland’s future.

The citizens involved in the vote had attended five two-day meetings since November 2016 and had heard from a series of legal and medical professionals.

The vote on the legislative parameters on abortion was held at the Grand Hotel in Malahide, Dublin, on April 23 with 88 eligible voters.

In a ballot on Saturday, April 22, a majority of 51 votes to 38 votes, recommended by ballot that the eighth amendment should be replaced with a constitutional provision that explicitly authorises the Oireachtas to legislate to address termination of pregnancy, any rights of the unborn, and any rights of the woman.

The results of both the Saturday and Sunday ballots will be sent to the Oireachtas, who will then decide to hold a referendum on the abortion issue.

Voters were asked a series of nine scenarios in which the procurement of an abortion should be legal in Ireland, including in the case of fatal foetal abnormality, serious risk to the mental and physical health of the woman, and in the case of rape.

In the case of real and substantial physical risk to the life of the woman, 99 per cent of those balloted, voted in favour of abortion up to 12 weeks, 22 weeks and no restriction as to gestational age. 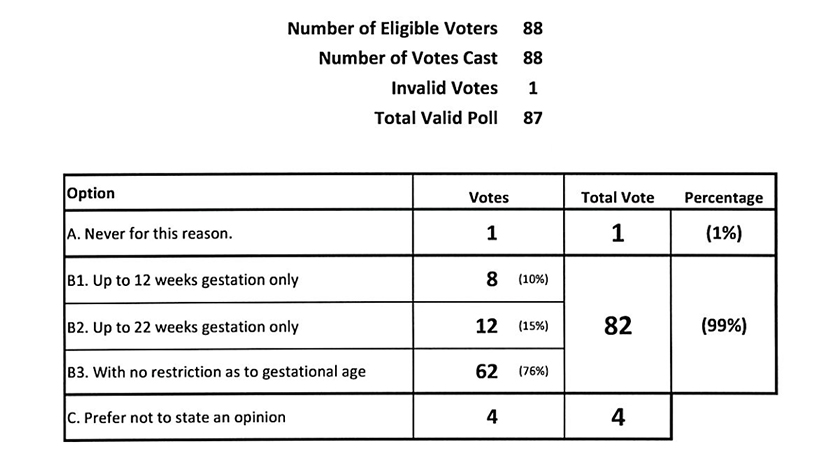 In the case of serious risk to the mental health of the woman, 90 per cent voted in favour of abortion up to 12 weeks, 22 weeks and no restriction as to gestational age. 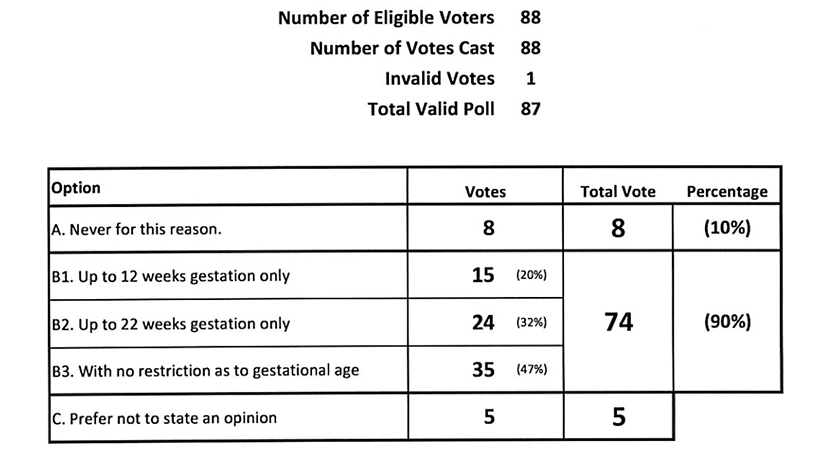 In the case of pregnancy as a result of rape, 89 per cent voted in favour of abortion up to 12 weeks, 22 weeks and no restriction as to gestational age. 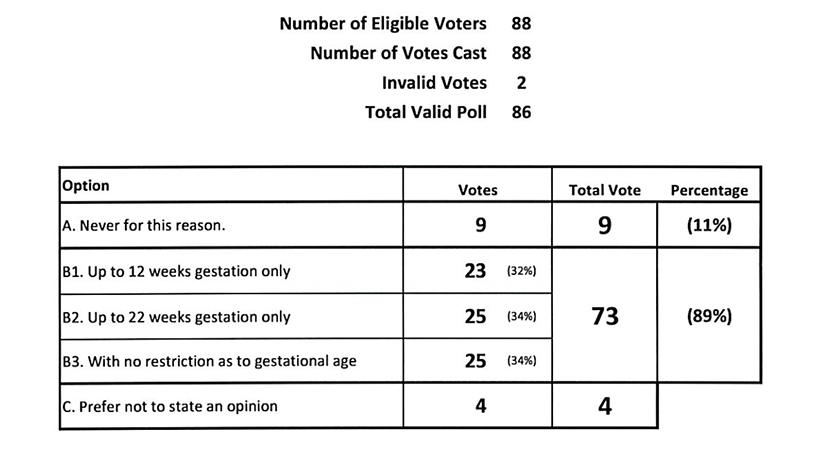 In the case of fatal foetal abnormality that is likely to result in death before or shortly after birth, 89 per cent voted in favour of abortion up to 12 weeks, 22 weeks and no restriction as to gestational age. 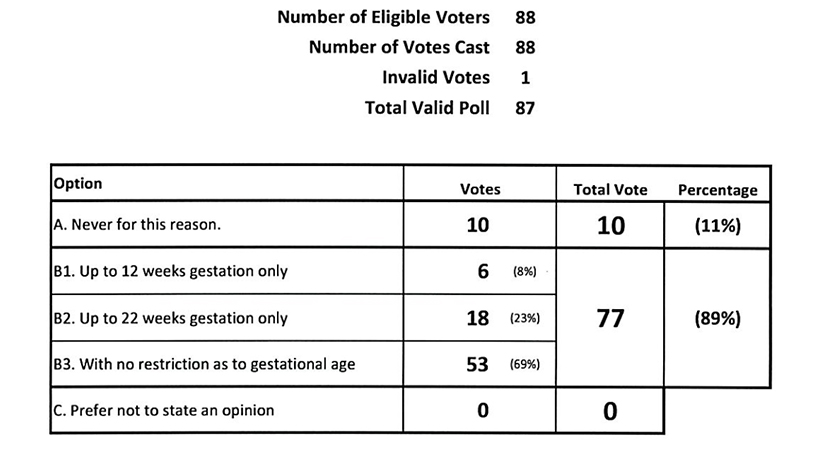 In the case of imposing no restrictions as to reasons for procuring an abortion, 64 per cent voted in favour of abortion up to 12 weeks, 22 weeks and no restriction as to gestational age. 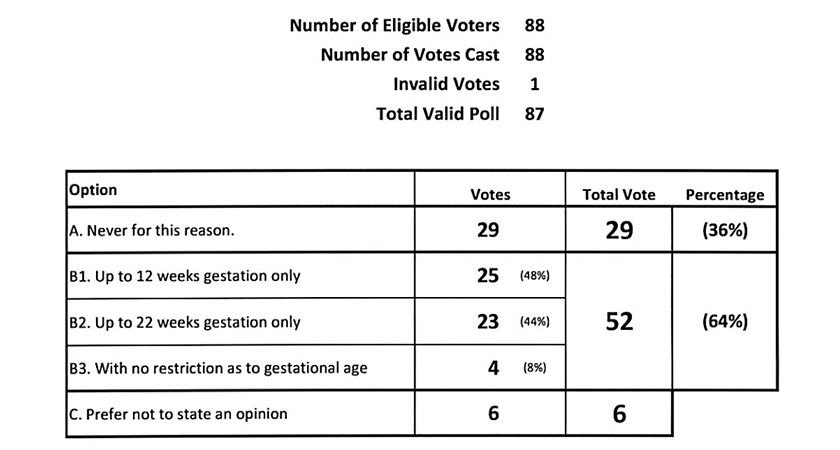 Responding to the vote, Cara Sanquest, of the London-Irish Abortion Rights Campaign said: “The Assembly’s recommendations are a hugely positive step forward for women's rights in Ireland - and support our view that the Eighth Amendment is not fit for purpose.

“The Assembly’s members have shown dedication throughout this process. They have accessed the evidence and today made their decision. They chose choice.

“We call on the Irish Government to set out a timeline for a referendum to give effect to the Assembly's recommendations.

Caoilfhionn Gallagher QC, of the London-Irish Abortion Rights Campaign and barrister at Doughty Street Chambers added: "Ireland is grossly out of step with international law and standards on reproductive rights, criminalising women for deeply personal and often difficult medical decisions, and abandoning over 3,000 women each year to leave our shores to seek treatment abroad.

“This weekend the Citizens' Assembly has made clear that this must change. Now the Government must take urgent action."

But the Pro Life campaign has said “no matter how one dresses it up, the vote at the Citizens’ Assembly would result in abortion on demand if the recommendations voted on were inserted in the Constitution.”

Cora Sherlock of the Pro Life Campaign made the remarks after the Citizens’ Assembly met for the last time yesterday, before they sent recommendations to the Oireachtas.

Ms Sherlock added: “There is nothing liberal or progressive about the Assembly recommending a referendum to strip unborn babies of their right to life in law and also ignoring the negative consequences of abortion for women.

“The writing was on the wall for weeks after the Assembly invited groups like BPAS, Britain’s largest abortion provider, to address them but never, for example, extended a single invitation to groups representing parents who say they owe the life of their child to the Eighth Amendment.

“This one-sided approach is typical of how the Assembly conducted its business from the get-go. It cannot be left unchallenged.

"If the next phase of the process is to have any credibility, the first thing the new Oireachtas Committee charged with looking at the issue must do is examine how the Citizens’ Assembly was allowed to operate in such a one-sided and chaotic way.

"One only has to look at proceedings to see the muddled and confused farce the Assembly has become.”