IRISH Foreign Affairs Minister Charlie Flanagan has admitted concern for both the Muslim and Irish communities in the US after President Trump signed a controversial immigration policy.

The Minister's comments come in the wake of the signing of an Executive Order entitled Protecting the Nation from Foreign Terrorist Entry to the United States by newly-elected President Donald Trump last Friday, January 27.

In the policy it states that: "In order to protect Americans, and to advance the national interest, the United States must ensure that those entering this country will not harm the American people subsequent to their entry, and that they do not bear malicious intent toward the United States and its people."

To control entry to the United States, the Order rules that there will be a temporary ban on entry to the country from seven nations.

"For the next 90 days, nearly all travelers, except U.S. citizens, traveling from Iraq, Syria, Sudan, Iran, Somalia, Libya, and Yemen will be temporarily suspended from entry to the United States.

"The 90-day period will allow for proper review and establishment of standards to prevent terrorist or criminal infiltration by foreign nationals."

As a result of the Order, the Refugee Admissions Program will also be suspended for 120 days while the Department of Homeland Security carry out a "review of screening procedures".

Upon launching the Executive Order, President Trump said: "I'm establishing new vetting measures to keep radical Islamic terrorists out of the United States of America - we don't want them here."

Minister Flanagan said the recent decisions in relation to US immigration have "far reaching implications."

"While US immigration policy is a matter for the US authorities, it is clear that the most recent decisions could have far-reaching implications - both on humanitarian grounds and on relations between the US and the global Muslim community.

"Accordingly, I share the concerns of other EU partners regarding this most recent development.

"Many people are feeling great concern about these changes including some Irish citizens in the United States. Our Embassy in Washington and Consulates remain in active and ongoing contact with Irish immigration centres throughout the US.

"I am conscious that matters are still evolving and that the US courts are now involved. We will continue to monitor developments in this area very closely." 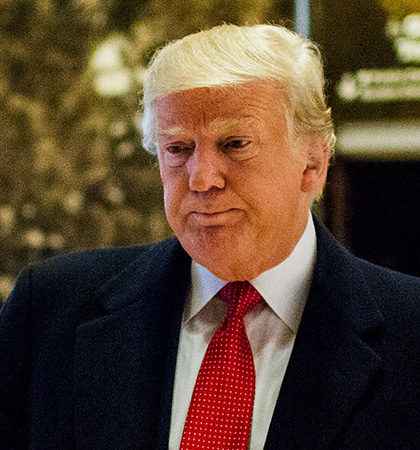 While the US has suspended its refugee intake, Minister Flanagan paid tribute to Ireland's support to incoming asylum seekers.

"Ireland has a vibrant multinational community which contribute a great deal to our country," Minister Flanagan said.

"Under our Refugee Protection Programme Ireland is welcoming 80 asylum seekers every month from migration camps in Greece, as well as refugees from the Lebanon."

Minister Flanagan also said he had been in contact with Taoiseach Enda Kenny and will raise the immigration issues during a trip to Washington next week.

"I have been in close contact with the Taoiseach about these developments and next week I will be in Washington DC for political meetings on Capitol Hill where immigration issues will be among those discussed."

A petition amassing more than one million signatures has also been started in Britain allowing President Trump to enter the country in his capacity as leader of the United States but states he "should not be invited to make an official State Visit because it would cause embarrassment to Her Majesty the Queen."

Taoiseach Enda Kenny's upcoming trip to the White House for St Patrick's Day has also become the subject of an online petition.

Shamrock for Trump: Not in my name was started over the weekend in an effort to inform the Taoiseach that he will not be representing the signatories.

Since the signing of the Executive Order, many have claimed it is a ban on Muslims, with #MuslimBan trending on Twitter and demonstrations against the order taking place across the US and protests planned for Britain and Ireland later today.

President Trump later said in a statement on his Facebook page that: "America is a proud nation of immigrants and we will continue to show compassion to those fleeing oppression, but we will do so while protecting our own citizens and border [...]

"This is not about religion - this is about terror and keeping our country safe.There are over 40 different countries worldwide that are majority Muslim that are not affected by this order.

"We will again be issuing visas to all countries once we are sure we have reviewed and implemented the most secure policies over the next 90 days."