A BRAVE member of the Irish guard found himself thrust into the spotlight on St Patrick’s Day after Prince William singled him out for praise during a visit to their barracks.

Prince William is a Colonel in the Irish Guard and was joined by his wife Kate Middleton, the Duchess of Cambridge, for the visit.

He wasted little time in seeking out Guardsman John Bogg, entering the barracks dining room where hundreds of soldiers were waiting to toast to him and, according to the Press Association, loudly asking: “Where’s Guardsman Bogg?”

The 19-year-old took centre stage after it emerged he had survived a potentially lethal buffalo attack during a training exercise in Kenya last October.

Guardsman Bogg, who has been part of the Irish Guards for 18 months having previously been deployed in the Falklands, was attacked on high ground during the early morning patrol late last year.

Speaking to the Press Association, Bogg recounted what he described as “one of the maddest experiences of my life.”

“I heard a grunting sound to my left and there was a figure built quite well, and I saw in the glint of the moonlight its horns, then it charged at us. 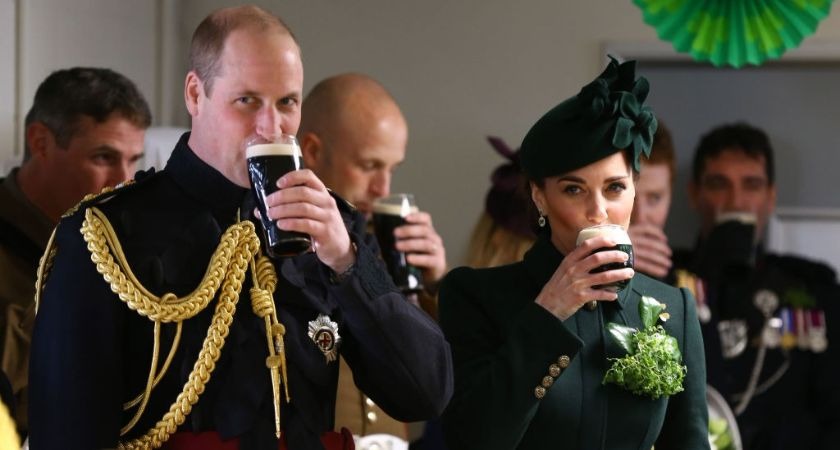 “Everyone ran to the left and I went to the right.

“It chased after me, flipped me with its horns, flew me about 10 metres further down, then it kept repeatedly butting me, about four or five times.

“My day sack saved me, otherwise I would have been impaled.

“Once it thought I was dead, finished, it gave me a final butt and ran off, trampled over me, so I was lucky to survive it. If it wasn’t for my day sack I wouldn’t be still here now.”

Prince William, who has visited Kenya on several occasions as part of his role with the Irish Guard, shook hands with Guardsman Bogg with the pair speaking for several minutes.

At one point he even asked where the rest of his comrades were during the attack, to which the teenager replied, much to the amusement of those in the room: “They all ran off sir”.

It was a St Patrick’s Day to remember for the young Irish Guard.

The Royal couple were later pictured sipping pints with the soldiers as part of a shared toast with the hundreds of soldiers in attendance.