BEVERLY HILLS, CA - JANUARY 07: In this handout photo provided by NBCUniversal, Saoirse Ronan accepts the award for Best Performance by an Actress in a Motion Picture – Musical or Comedy for “Lady Bird” during the 75th Annual Golden Globe Awards at The Beverly Hilton Hotel on January 7, 2018 in Beverly Hills, California. (Photo by Paul Drinkwater/NBCUniversal via Getty Images)

The actress scooped the award for her role in Best Film winner Lady Bird at the 75th Golden Globe Awards last night in Beverley Hills.

Nominated for the award alongside Judi Dench, Margot Robbie, Helen Mirren and Emma Stone, it's the first Golden Globe win for Ronan as she was previously nominated for her roles in Atonement and Brooklyn.

Her work in Greta Gerwig's Lady Bird is one of the most talked about performances in film over the last year.

Accepting her award she said: "Oh thank you! My mam's on FaceTime over there on someone's phone over there so hi!

"I have no time at all to say thank you but I just want to say how inspirational it's been to be in this room tonight.

"I'm here with my best friend Eileen, and I just want to thank Hollywood Foreign Press for the award, all the producers on the film, all of the women who I love so much in my own life who support me every single day - my mother, who’s on FaceTime. Margot, all of my friends and family and actually everyone in this room."

A round of applause for Saoirse Ronan taking home the award for Best Performance by an Actress in a Motion Picture - Musical or Comedy for her role in @LadyBirdMovie! #GoldenGlobes pic.twitter.com/fXm4pygZ41

It wasn't the only win of the night for the Irish as London Irish director Martin McDonagh's film Three Billboards Outside Ebbing, Missouri was nominated in six categories. 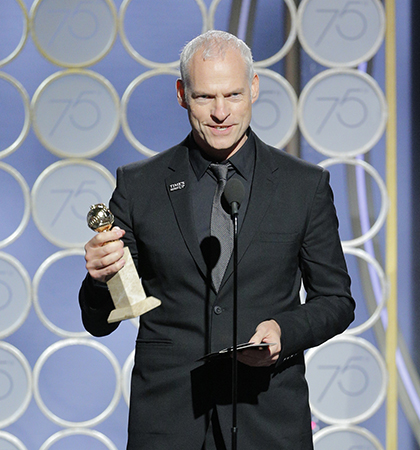 It was the biggest film winner on the night, winning four awards, including Best Motion Picture - Drama, Best Screenplay and two of his stars, Frances McDormand and Sam Rockwell, won Best Actress - Drama and Best Supporting Actor respectively for their performances.

Accepting the award for Best Screenplay, McDonagh also spoke about his Irish mother - who he said really wanted LadyBird to win.