AN IRISH WOMAN living in the West Midlands who was convicted of a Syria-related terrorism offence has been sentenced to two and a half years in prison.

Omagh native Lorna Moore was planning to take her three young children to Syria where her husband, Sajid Aslam, is believed to be.

Moore was found guilty of failing to disclose information about her husband’s planned travel to the conflict zone in February.

The Birmingham Mail reports how Judge Wilde said to Moore during sentencing: "You are a very strong character. One of the troubling things about you is your ability at telling lies."

Moore, who had denied the charges, was among a group of four to be sentenced for terrorism offences at the Old Bailey on Monday, May 23.

Ayman Shaukat, 28, was sentenced to 10 years in prison and given five years on extended licence after being found guilty of helping to facilitate a network to enable people to travel to Syria and engage in terrorism.

One of the men is believed to be Moore's husband, Aslam, West Midlands Police said.

Alexander Nash, 22, was sentenced to five years in prison after he unsuccessfully tried to travel to Syria.

The fourth member of the group, Kerry Thomason, 24, was convicted for assisting to prepare for an act of terrorism by helping her husband Isaiah Siadatan travel to Syria to engage in acts of terrorism.

Thomason was handed a two year suspended sentence with a supervision order and six-month tagged curfew between 6pm and 6am. 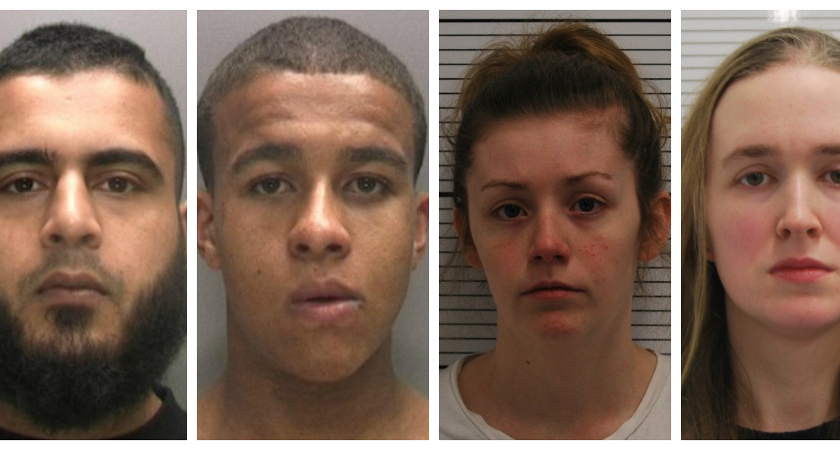 Left to right: Ayman Shaukat, Alexander Nash, Kerry Thomason and Lorna Moore [Picture: West Midlands Police]
Moore's husband, Aslam departed for Syria in August 2014 and when he made it across the Turkish-Syrian border sent a coded message to Shaukat, whose role was described as “pivotal”, to inform him of his success.

The Belfast Telegraph reports how the court was told, during the trial, that within months of her husband’s departure, Moore had booked flights for her and her three children to fly to Majorca but their final destination was Syria.

The prosecution said her plan was revealed in a text from Nash’s wife in Turkey saying “see you there”.

Trainee maths teacher Moore, 34, who is originally from Omagh in Co. Tyrone, met Sajid Aslam in Manchester in 2000, when they were both students in the city.

Moore converted to Islam in 2003 and the couple were married soon after.

They had two children in quick succession and Moore fell pregnant with their third child in 2013.

When giving evidence in court, Moore said she would never put her children’s lives in danger, saying: “They mean the world to me”.

The counter-terrorism unit of West Midlands police began their investigation into the alleged offences in 2014, when the parents of another member of the Walsall-based group were concerned he had travelled to Syria.

Assistant Chief Constable Marcus Beale said: “As a result of these enquiries, counter-terrorism investigating officers discovered Ayman Shaukat’s instrumental role in helping organise travel plans for other members of this group, including Nash and Aslam’s preparation for acts of terrorism.

“Further investigations revealed both Kerry Thomason’s role in assisting her husband Siadatan’s plans to prepare for acts of terrorism and Lorna Moore’s knowledge of Sajid Aslam’s, preparation for suspected engagement in terrorism.”