THE IRISH POST has agreed a transaction on the purchase of the digital and intellectual property assets of diaspora broadcaster Irish TV.

The move, which will see The Irish Post acquire the Irish TV brand, business databases, website domains, social media and the extensive video content library, follows the winding up of the company in December - less than three years after it was launched in Co. Mayo in 2014.

The transaction between The Irish Post and liquidator Michael McAteer, of Grant Thornton in Dublin, was announced today.

The Irish Post’s acquisition of the station’s assets, which is subject to the approval of Ireland's Competition and Consumer Protection Commission, will give the British-based media organisation an important “foothold” in Ireland, the organisation claimed today.

“The Irish Post is delighted to have agreed the terms for the purchase of these assets and complements our own moves into the digital arena with video journalism and broadcasting becoming more prevalent everywhere,” a spokesperson said.

“We see a strong future for Irish TV and indeed The Irish Post on small screen platforms like Facebook and Instagram, which can be successful away from the traditional large screen broadcast networks. There is also the opportunity to supplement this by a return to Sky and other TV platforms.”

They added: “On a community level, we are believers in the Irish TV concept of bringing local Irish stories to the global Irish diaspora audience and the support shown by London Irish businessman John Griffin to the West of Ireland. The Irish Post wish to establish a physical presence there and at a time when British-Irish relations, both economic and community, are to the fore we are pleased to now have agreed the terms of this transaction, which subject to the relevant merger approvals, will give us a foothold in Ireland.”

The purchase may even provide an opportunity to expand the reach of Irish Post events, as the spokesperson explained: “The annual Irish Post Awards in London is a huge and popular event and we have noted the successful Irish TV Country Music Awards from afar and see further potential in events in the future.”

Read the full press release for today's announcement below... 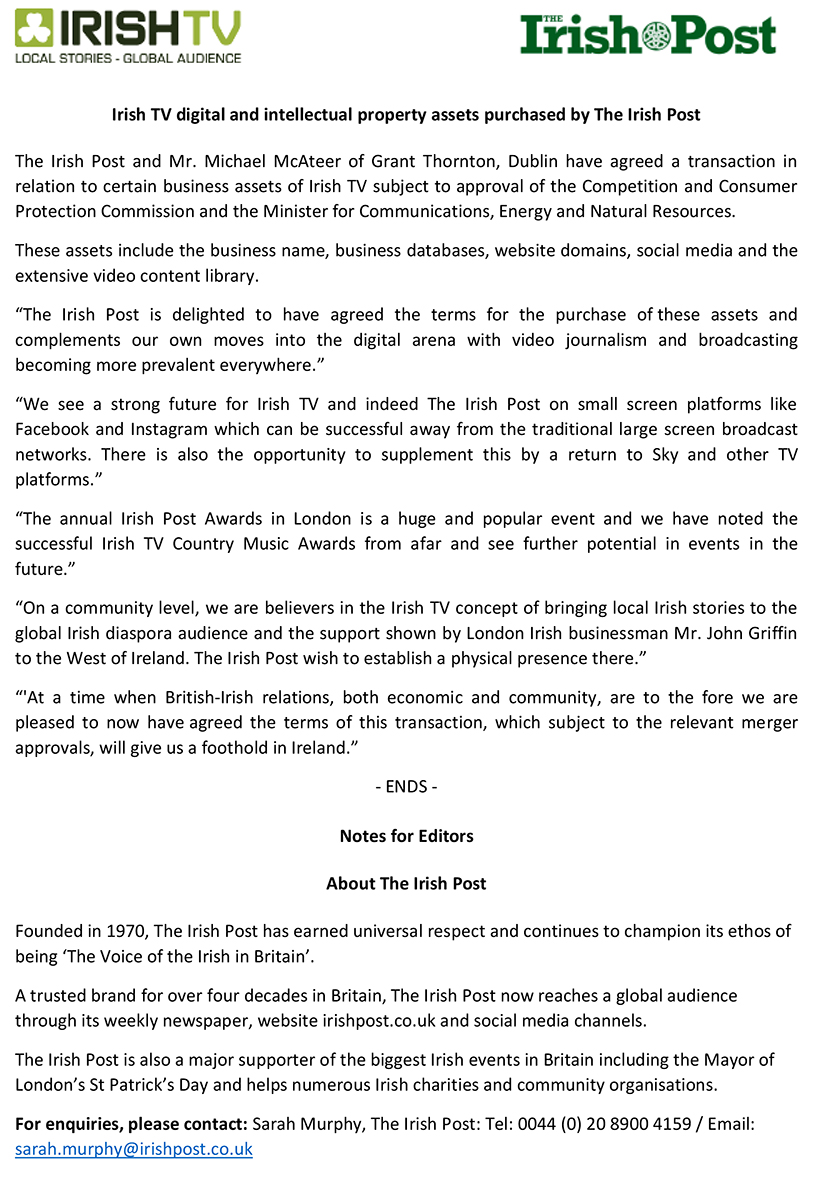