AN IRISH priest has condemned the Catholic Church's stance on same-sex unions as 'not Christian'.

Fr Paddy Byrne, from Portlaoise, was responding to a recent report from the Vatican which ruled that the church cannot bless same-sex unions as 'God doesn't bless sin'.

In the ruling, the CDF stated that while "God loves every person and the Church does the same", and rejects all unjust discrimination, the church cannot bless a same-sex union as it does not follow the plan of the Creator.

The blessing of same-sex unions, the CDF said, is not "licit" and "there are absolutely no grounds for considering homosexual unions to be in any way similar or even remotely analogous to God's plan for marriage and family".

The ruling insisted that this is not a "form of unjust discrimination" and that a gay person can be blessed individually, but the blessing of a same-sex union cannot take place as a "reminder of the truth... of the very nature of the sacramentals".

Fr Byrne, who is a part of the Abbeyleix Parish, yesterday took to Twitter where he lamented over the ruling, citing his own experience in blessing "ceremonies of every description".

Over the past 20 years, Fr Byrne has blessed "pets, cows, crops, rings, cars, tractors," he said.

"Yet a same sex couple who request a simple blessing on their union must be turned away.

"This is not Christianity," he said.

20 years in my priestly ministry I have been involved in blessing ceremonies of every description. Including blessings of pets, cows, crops, rings, cars, tractors……Yet a same sex couple who request a simple blessing on their union must be turned away. This is not Christianity.

The ruling from the Vatican was a blow for Catholic members of the LGBT+ community, who were hoping for progression from their church, and Fr Byrne's words have resonated with people across Ireland and beyond, garnering almost 5,000 'likes' on Twitter.

"I feel so sad for the church," one person wrote in response to Fr Byrne's post. "What I've learned about Jesus in my 48 years of life is he preached love not hate, inclusion not exclusion."

Earlier this month, former President of Ireland, Mary McAleese, criticised Pope Francis following the Vatican ruling, saying she was bitterly disappointed by what could be perceived as Pope Francis raising and subsequently dashing hopes that LGBT Catholics were close to being accepted by their religion. 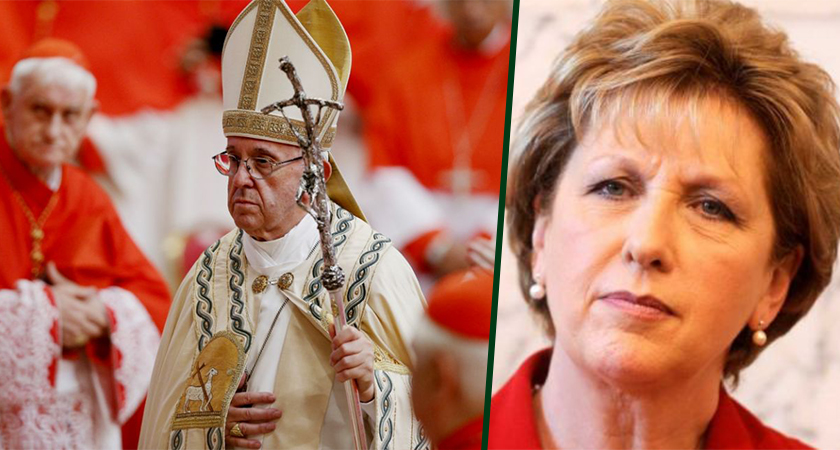 As reported by The Irish Times, the former president criticised Pope Francis as a populist whose "chummy words to the press" makes people believe the church is becoming a more progressive and accepting place-- before the Vatican dashes such hopes soon afterwards.

Pope Francis made headlines across the globe late last year when he appeared to voice his support for same-sex families and same-sex unions, as he spoke in a new documentary stating "homosexual people have a right to be in a family" .

However, the Vatican later released a statement insisting the Pope's comments were taken out of context and the Church's stance on the LGBT community and gay marriage has not changed.