AN Irishman is speaking beyond the grave as he spends 72 hours in a coffin in to help people overcome suicide and addiction.

Dubliner John Edwards has been buried at Willowfield Church in east Belfast since yesterday and will remain there until Friday, March 3.

Mr Edwards is a recovered drug addict and alcoholic and set up WalkingFree.org to reach out and help others who are suffering.

Mr Edwards, who is based in Bradford, West Yorkshire, has been buried underground since 2pm yesterday, March 1 and is live streaming his time underground on Facebook and YouTube.

Speaking at the launch on Facebook Live, Mr Edwards said "It seems like a crazy idea. But I've just been to too many funerals of young people, committing suicide and overdosing.

"I've seen 23 of my 30 friends die from AIDS, Hepatitis C, suicide, and drug addiction. We need to put a stop to this." 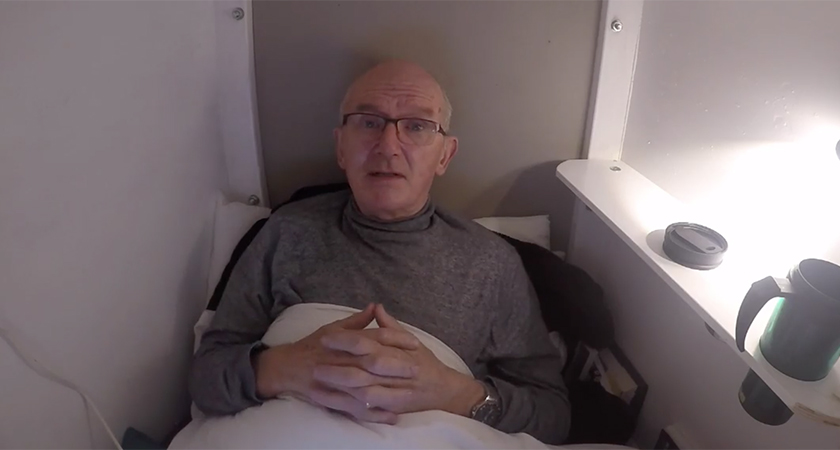 Since the launch, he has been inundated with people who have shared their experience of depression and addiction, as well as those thanking him for his activism.

In the specially-adapted coffin, which is 8ft long, 3.5ft high, and 4ft wide, Mr Edwards also has a caravan toilet, a mattress and access to air, food and water supplies through a fitted pipe and access to electricity.

Writing on his website, Mr Edwards said, "I spent over 20 years of my life as an addict and alcoholic. I was homeless, suicidal, abused, been in psychiatric hospitals.

"I have had cancer twice, a liver transplant, Hepatitis C but now recovered. I have witnessed many of my friends and loved ones dying. I have experienced an incredible encounter with God 27 years ago. 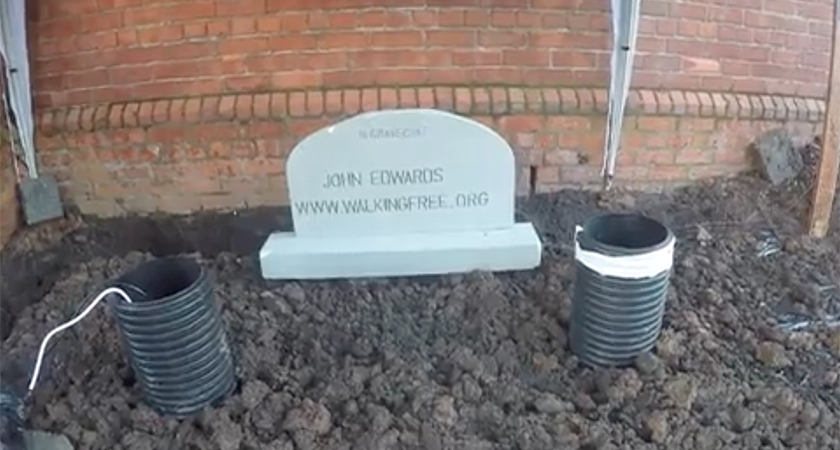 A headstone sits upon John's 'grave' in Belfast as he remains buried for 72 hours. (Picture: Facebook)

"I am free, clean and sober now for 23 years. I have set up several Christian rehabilitation centers, homeless outreach and feeding centers.

"I am happily married, a step father and grandfather. I reach out to everyone from millionaires, business people and street folk."

Mr Edwards is not the first Irishman to be buried alive in a coffin however, as in 1968, Tipperary man Mick Meaney was buried in a coffin underground in Kilburn for 60 days.

Complete with a practice sleep in a coffin above the Admiral Lord Nelson pub in Kilburn, and a 'Last Supper' held before his burial, 33 year old Mick was sealed into an oversized coffin — made by Rick Whooley from Cork — and passed out a window of the pub and onto the back of a flatbed lorry and carried to Keane's Yard where he remained for two months.

However, he failed to break the Guinness World Record as a judge was not present during his interment.

You can read more about Mick Meaney and his incredible feat, here.

If you want to follow and get involved in GraveChat with John Edwards as he remains buried in Belfast, you can follow him on Facebook here, Skype him on GraveChat or text 07402677943.