Islington pub at the forefront of the Mica redress campaign

DONEGAL LANDLORD Brian Doherty and his business partner, Corkman Phil O’Sullivan, are holding a Mica awareness event at The Gunners Pub on Blackstock Road in London this October 9.

This comes off the back of the Mica redress campaign currently underway in huge parts of rural Ireland.

Mica muscovite and pyrite materials have been used in the construction of over 7,000 properties, many of which are starting to experience structural degradation, and with the worst affected counties being Donegal, Mayo and Clare.

Campaigners are requesting 100% of rebuild and repair costs from the Irish Government as thousands of people have been left with unsecure housing.

Speaking with The Irish Post this morning, Mr. Brian Doherty, proprietor of The Gunners pub in Islington, was keen to indicate that his establishment's Mica awareness day would be a family-friendly event.

“There’ll be music, stickers available, posters, and space for the whole family; including any kids and four-legged friends!”

Mr. Doherty was motivated to get involved in raising awareness for the Mica Action Group (MAG) after members of his own family – including his sister and his girlfriend – had their houses affected.

“They’ve had a terrible time,” he said.

“The first thing you notice is the external wall crumbling, then the bad weather gets in, especially in winter.

I know people who have said it’d be cheaper to buy an empty site than a brand new house made with Mica.

Eventually the inner walls go, then the foundations, and even if campaigners get 100% redress, they won’t be covered for interior damage. Just structural stuff.” 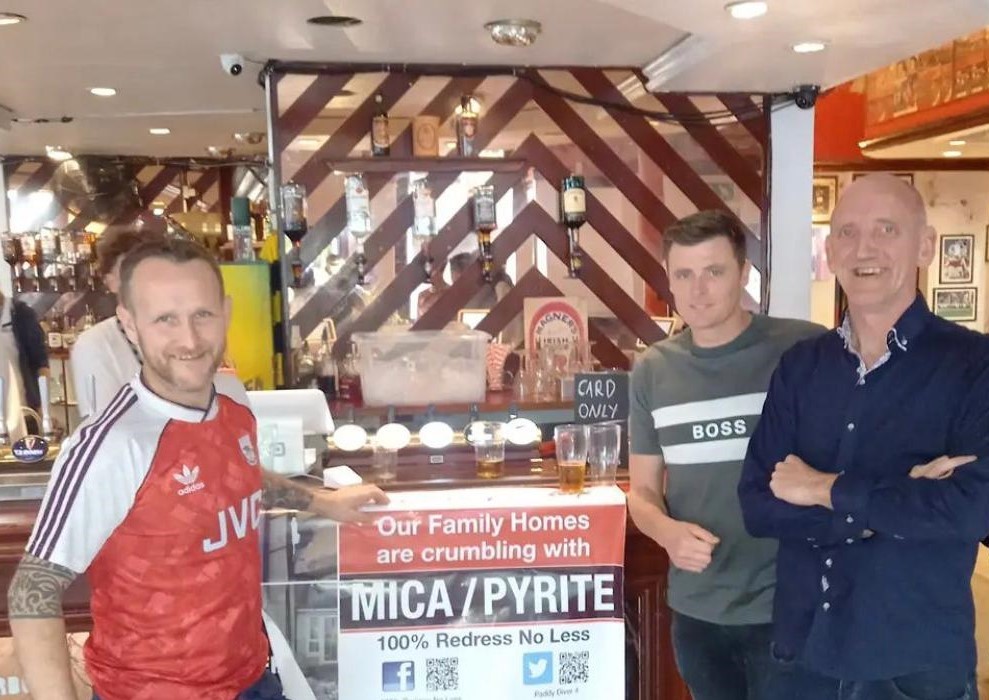 Mr. Doherty is friends with Paddy Diver, one of the first Mica redress activists to bring the issue to the attention of Leinster House.

He has since taken a step back from the political side of the campaign, but insists that his time is better served as an organiser at ground level.

Mr. Diver told us, “Myself and others have been fighting the Government on this for years, and they’ve known about the problem since at least 2014.

Things came to a head this year and Minister O’Brien (Darragh O’Brien, Fianna Fáil Minister for Housing, Local Government and Heritage) promised us the moon and stars.

First it was meant to be sorted the end of July, then the end of September. Now we’re being told that it might be October and we’re sick of being messed about. No more.”

Mr. Diver, members of the MAG and other pressure groups affected by infrastructural damage to their properties are seeking 100% redress for rebuild and repair costs.

Late last year, the Irish Government introduced the Defective Concrete Blocks Grant scheme, which offered 90% of redress costs, leaving homeowners to foot the bill for the remaining 10%. Campaigners insist that this is inadequate, since financial institutions have been hesitant to offer mortgage loans on already damaged properties.

This had left some homeowners liable for up to €100,000, and consequently, only 500 applications have been made to the scheme since its introduction. 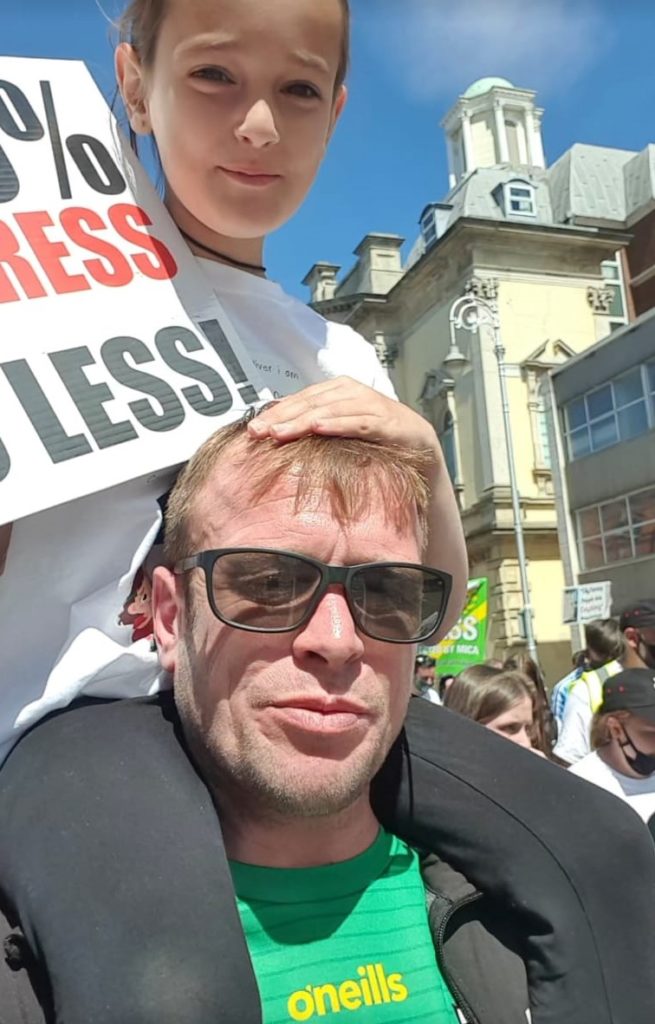 Paddy Diver at a Mica Redress march in Dublin, June 2021

“We’ll be coming to Dublin again on Friday 8 October,” Mr. Diver told us.

“We’re expecting 30,000 people, all of whom are angry about the level of Celtic Tiger greed that allowed these defective properties to pass inspection in the first place.”

Mr. Diver insists that any help and support which can be offered by the Irish diaspora – particularly in England – is greatly appreciated.

UK-based homeowners with properties in some of the affected counties, including Donegal, Sligo, Mayo and Clare, are not eligible for any redress at this time.

Brian Doherty of The Gunners pub in Islington has invited Irish supporters of the Mica redress campaign to “Come and celebrate or commiserate the day after the march in Dublin.

There’s no obligation for fundraising or any of that, but if you want to make a donation, we’ll happily get that passed onto the folks at home.”