Jurgen Klopp of Liverpool, Caoimhin Kelleher of Liverpool celebrates the victory during the UEFA Champions League match between Liverpool v Ajax at the Anfield on December 1, 2020

JURGEN KLOPP may have just identified a future first-team star in Caoimhin Kelleher after the Irish youngster starred in Liverpool's 1-0 win over Ajax at Anfield.

The German lavished praise on the 22-year-old Cork-native, who last night made his European debut, keeping a clean sheet in the process.

Kelleher, a Republic of Ireland U21 international, produced a number of impressive saves, including one from a close-range header from Dutch forward Klaas Jan Huntelaar to keep Liverpool's lead intact with just a few minutes to play. 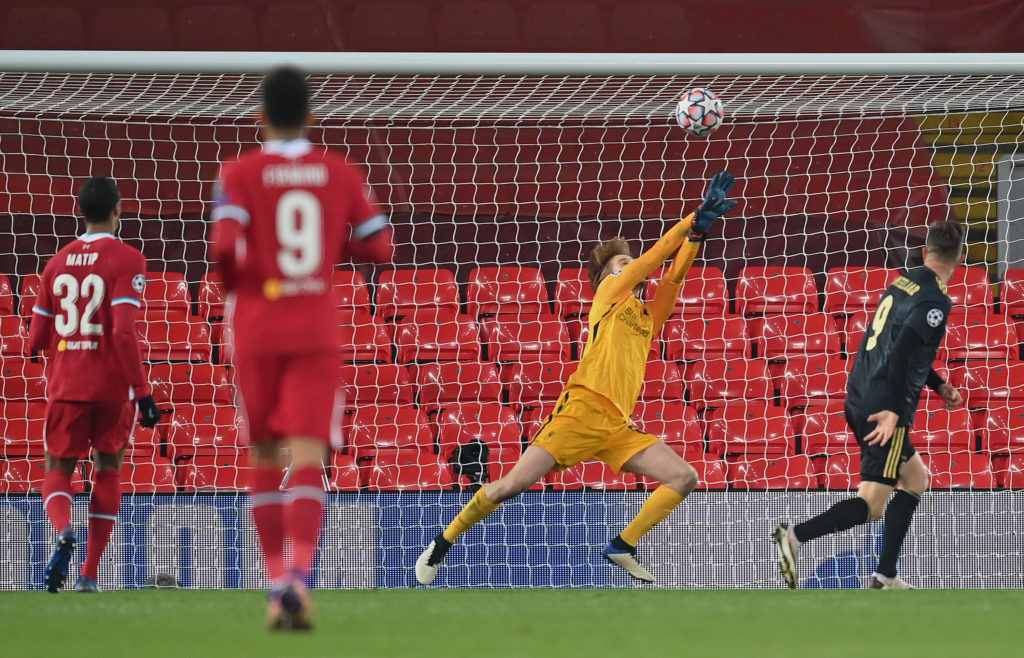 Caoimhin Kelleher of Liverpool saves from Klaas Jan Huntelaar of Ajax during the UEFA Champions League Group D stage match between Liverpool FC and Ajax Amsterdam at Anfield on December 01, 2020

In the absence regular stopper Alisson, Klopp made the decision to start the inexperienced Kelleher ahead of usual backup keeper Adrian, and it paid off.

"It is a situation where I have to say it was easy to decide for Caoimhin, because he deserves it," Klopp told reporters after the game.

"But [it was] difficult to decide against Adrian because he had done well for us."

Liverpool are through to the Champions League knockouts ✅

A great display from the young keeper 👏 pic.twitter.com/HpP2junkqV

Klopp stressed that it was Kelleher's ability with the ball at his feet - together with his shot-stopping - that ultimately forced him into handing the youngster his big chance.

"He [Adrian] did a really good job but tonight we needed the package of Caoimhin and he is a top talent, really good shot-stopper and top footballer," said Klopp.

"Honestly since I've been at Liverpool that's one of the biggest results."

"I'm really happy how Caoimhín Kelleher dealt with it. How calm he was."

"He will either sleep really well tonight or not at all," joked the Liverpool boss.

The Reds secured qualification for the last 16 of the Champions League after another hot academy prospect - Curtis Jones - grabbed the winner after smartly anticipating a cross that deceived Ajax goalkeeper Andre Onana at the back post.

Surely Ireland manager Stephen Kenny will have been keeping an eye on Kelleher's performance last night, though one imagines his focus should be on scoring more goals rather than trying to prevent more from going in.

A BIG save from the #UCL debutant in the 88th minute! pic.twitter.com/nvHBJxvTCC