VICTIMS of the Kegworth air disaster have been remembered in a service to mark 30 years since the Belfast-bound flight crashed in Leicestershire.

Some 47 people died when a British Midland Boeing 737 from Heathrow to Belfast went down in an embankment of the M1 as it tried to divert to East Midlands Airport on January 8, 1989.

Another 74 passengers were injured after the plane's pilots mistakenly switched off the wrong engine when another engine caught fire following take-off from Heathrow.

Witnesses at the time said the jet "bounced" over the motorway, hit the central reservation and crashed into the embankment before smashing into pieces.

Less than 10 of the flight's total 126 passengers and crew escaped unharmed.

Hundreds of survivors and victims' family members gathered for a memorial service at St Andrew's Church in the village of Kegworth on Tuesday, a short distance from the scene of the disaster.

Floral wreaths were laid and the names of those who perished were read out during the 45-minute church service, followed by a minute's silence. 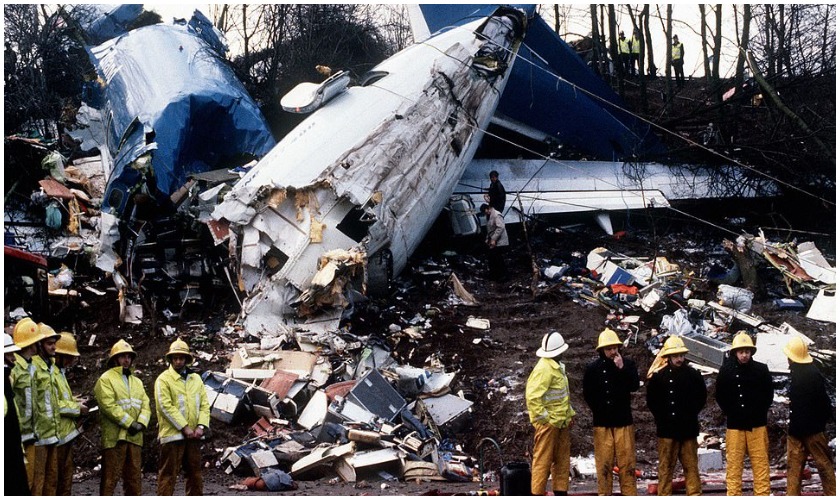 The British Midland jet crashed on the M1 near Kegworth, Leicestershire on January 8, 1989 (Image: BBC News)

Many of those in attendance at the commemorative ceremony, which was overseen by Reverend Lauretta Wilson, had travelled over from Northern Ireland and wiped away tears as they paid their respects.

Reverend Wilson said the "fateful night" of January 8, 1989 had never been forgotten in Kegworth.

"Whatever our motivations, it is good to have the opportunity to remember and honour those who lost their lives," she added.

"The dreadful event shook all of our communities."

Loud bangs were heard coming from the left-hand engine of the plane as an evening meal was being served shortly after take-off from the capital at around 8pm that night.

Captain Kevin Hunt and his co-pilot David McClelland shut down the correctly-working right-hand engine and, as a result, their efforts to make an emergency landing at East Midlands Airport tragically failed.

Instead, the plane - which was partially on fire and had blazing debris falling from it - came down on the M1 embankment with the runway only a few hundred yards away.

Miraculously, the plane managed to avoid hitting any cars on the motorway when it went down and no one on the ground was hurt.

Most of the 47 deaths occurred at the front of the plane but 79 people, including the two pilots, survived.

Leslie Bloomer, a passenger who was rescued from the wreckage by local police sergeant Bob Salter, recalled the devastating crash following the service.

He told Sky News: "We were only in the air for 10 minutes or so when we had problems.

"There were sparks coming from the engine, the smell of smoke. The pilot eventually came on said we were having trouble with the engine.

"The plane never really settled down and when we were coming into land the engine disintegrated - and I can remember the last few seconds before hitting the ground.

"When it stopped, I was trapped by the legs under the seat. I pulled myself out, got to the edge of the plane, and this man was standing there, grabbed me and took me down to the motorway. I never thought I'd meet him again".

His rescuer Mr Salter said it was "remarkable" that anyone had survived the crash, adding that he never expected anyone to be saved from the wreckage alive when the plane went down.

In an emotional reunion, both said they would keep in touch after the commemoration.

Mr Bloomer, who was only on the Belfast-bound plane after making a late change to his booking, added: "It's been amazing to come over here to see the service and the highlight was meeting Bob.

"He recognised me immediately as soon as I came into the hall. He's a lovely man and it was an emotional meeting."

Mr Salter was on emergency duty that night and was the first person on scene in the wake of the accident.

He recalled: "I was sent to East Midlands Airport, but before I got there the aircraft crashed in front of me and broke up into three places on the embankment of the motorway.

"It was still on fire when myself and another officer climbed onto the wing, took the exit door out, and the first person I saw was Leslie here.

"We dragged him down the motorway embankment and put him in the back of my police Range Rover.

"Today was very emotional, meeting him. It feels as though we've been friends for 30 years."

Brighton bombing anniversary to be commemorated by city's university