THE Fermanagh-born Dean of Leicester claims the city has been "stunned" to see lockdown restrictions re-imposed due to a steep rise in Covid-19 infections locally.

The Very Rev David Monteith, from Enniskillen, offered support to all communities in the area, in what he has called “very uncertain times” due to the pandemic.

Leicester is an ethnically diverse city, with a significant Irish population — including a Travelling community — as well as being home to a substantial number of Asian communities.

Rev Monteith (52) is an Anglican, with his congregation drawn from across the communities.

He would be regarded as being on the liberal wing of the Church of England. 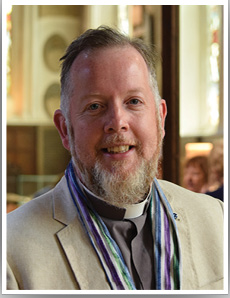 A short church biography confirms that the dean "shares his life in a Civil Partnership with David Hamilton”.

In Leicester the majority of the Irish population is Catholic.

But the Dean has extended offers of support to all communities no matter what religion, or none.

He has called on the British government not to forget the most vulnerable members of society in Leicester.

The Dean confirmed that all Anglican churches, in line with other places of worship, have once again been obliged to close their doors to parishioners.

Leicester is the first localised lockdown in the UK, imposed after a spike in new infections was recorded.

"Emotionally it's been devastating," Kiran Kala, manager at The Emerald Centre said this week.

The centre, regularly used by up to 200 people from the city's Irish community, has remained closed throughout the lockdown.

But an outreach project called Shine a Light has supported more vulnerable people in the community, focusing on people from all backgrounds.

That support has included deliveries of shopping, hot meals, prescriptions, as well as organizing online events such as quizzes.

Not all vulnerable members of the community have internet access, and this is taken into account by the centre.

The Emerald Centre recently received money from the Irish Government through its Emigrant Support Programme (ESP), which provides emergency Covid-19 funding to help meet the needs of Irish people.

The Emerald Centre had been preparing to re-open fully, with appropriate anti-coronavirus measures being put in place by the staff, when the new lockdown was announced.