The Mayo team that featured in the 1916 All-Ireland final [Image: xxxxx]

THIS image of the first Mayo team to compete in an All-Ireland final in 1916 was sent to us by the nephew of goalkeeper Padraic Loftus (middle row, second from right).

It was taken in Castlerea before the Connacht final against Roscommon, and the Westerners became the first team from the province to reach an All-Ireland football final at the 29th attempt.

Wexford beat Mayo 3-4 to 1-2, with the final going ahead on December 17 despite the Croke Park pitch freezing overnight.

Just 3,000 people were in attendance, largely because there were very few train services running to Dublin under the martial law introduced after the Easter Rising.

“Padraic was my late father’s brother,” Paddy Loftus told The Irish Post. “He died after a rugby match a year later. Apparently a ball caught him on a fall after a trip tackle and damaged his liver.

“This snap was sent from one of my first cousins in Canada. Padraic had clean sheets against Roscommon and in the semi-final replay against Cork, but All-Ireland final day did not start well as he slipped into a canal on ice near Jones’s Road bridge.

“Folk would use it as a shortcut from Phibsborough where there were many Mayo folk in digs.

“We’re told that all three Wexford goals were superb; it was the only day he ever conceded three in inter-county football.

“Raised in Drumcondra, I listened to visiting uncles for many years bemoaning deflections and shots striking woodwork. So near but yet so far.”

Perhaps this year will finally yield better luck for followers of Mayo. 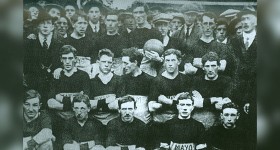 The Mayo team that featured in the 1916 All-Ireland final