Lusitania telegraph machine recovered off coast of Ireland 102 years on

DIVERS have recovered the main telegraph machine from the Lusitania shipwreck off the coast of Co. Cork – over a century after the ocean liner sank.

An attempt to raise the artefact from its final resting place – 11 nautical miles south of Kinsale – ended in failure last summer when a lift bag punctured.

Heated questions were raised at an Oireachtas committee meeting in March as to why a diver was allowed to carry out the botched operation without an archaeologist present.

The telegraph machine was feared lost but was rediscovered recently during licenced dives and its position was marked on the sea bed.

On Tuesday, it was finally brought to the surface under the supervision of an archaeologist from the National Monument’s service.

Minister Humphreys said: "I am happy to confirm that this important piece of the Lusitania has now been recovered from the wreck off the west Cork coast. 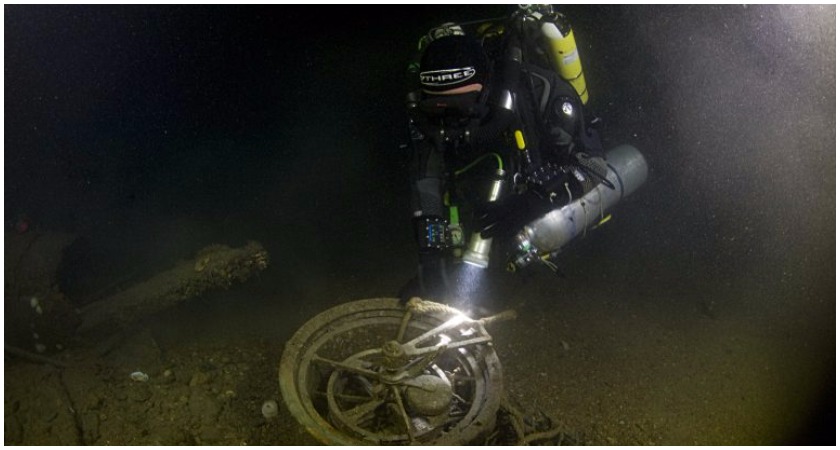 The artefact was recovered by divers 11 nautical miles south of Cork (Picture: Department of Heritage)

"I also understand that the owner of the wreck, Mr Gregg Bemis, intends to place the telegraph, and the pedestal successfully recovered last year, on display in a local museum, along with other artefacts he has recovered during earlier dives, which is great news for the local community."

The ship sank in just 18 minutes and claimed the lives of 140 Irish people – 70 of them passengers and 70 of them crew.

Among the Irish victims of the disaster were James McDermott, the ship’s surgeon from Co. Cork, his assistant, Dr Joseph Garry from Co. Clare, the composer Thomas O’Brien Butler and renowned Irish art dealer Hugh Lane.

The ship's captain William Turner, who survived, had received messages on the morning of the disaster that there were German submarines in the area and altered course.

The wreck is classified as a war grave and is protected by an Underwater Heritage Order under the National Monuments Acts.

In May, a memorial garden complete with a 20-metre long bronze sculpture was unveiled in Cork to honour the Lusitania’s dead.

Coventry commemorates Irish soldiers on centenary of Battle of Gallipoli