PRESIDENT of Ireland Michael D Higgins has paid tribute to the late Archbishop Desmond Tutu, claiming he gave "a voice to those most in need".

Archbishop Tutu passed away earlier today at the age of 90, according to South African President Cyril Ramaphosa.

The anti-apartheid campaigner and Nobel Peace Prize winner was one of South Africa's most recognised figures.

'A man of profound wisdom'

"With the passing of Desmond Tutu, the world has lost not only a great spiritual leader but a great advocate for an informed, sensitive and caring society, defined by compassion and kindness," said President Higgins.

"Archbishop Desmond Tutu was a man of profound wisdom and as of a character that emphasised hope and possibility.

"Drawing strength from his belief that forgiveness has the potential to free an individual from the confines of past hurt, his inspirational leadership was a source for what was life-changing, not only for South Africa, but for countless people throughout the world, giving a voice to those most in need." 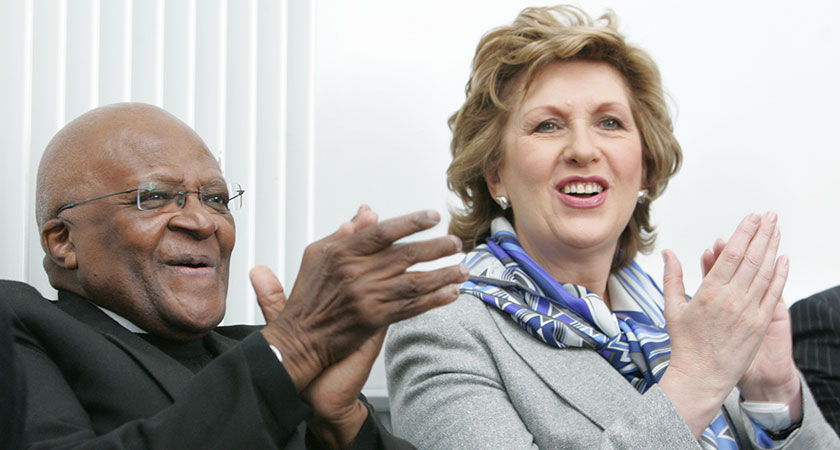 Archbishop Tutu with then President of Ireland Mary McAleese at the opening of a new Music Room at St Joseph’s School, Ballymun (Image:Leon Farrell/RollingNews.ie)

President Higgins said Archbishop Tutu's death will be keenly felt in Ireland, after he met with striking Dunnes Stores workers in 1984, who had refused to handle goods produced in South Africa in protest at apartheid.

"His death will be felt by all those in Ireland who made themselves part of the anti-apartheid movement," added the president.

"Those Dunne Stores workers who took part in the strike against Apartheid in the 1980s, and to whom he often referred.

"Indeed, many who will have valued Archbishop Tutu's support for the strikes will in particular recall his meeting with striking workers Karen Gearon and Mary Manning, along with union official Brendan Archbold at a stopover in London on his way to receiving the Nobel Prize in 1984."

'The conscience of South Africa'

"Very sad to hear of the passing of Archbishop Desmond Tutu," Martin wrote on Twitter.

"A tireless campaigner for social justice & reconciliation, he was the conscience of South Africa and beyond.

“His unshakeable faith in humanity brought people together in NI too, a vital part of our own peace process.”

Speaking to Sky News, former Irish President Mary Robinson and chair of NGO The Elders said Archbishop Tutu would describe himself as “a prisoner of hope”.

Mary Robinson, Chair of the Elders, shares her favourite memories of South Africa's Archbishop Desmond Tutu, including his response to someone asking him why he was 'such an optimist' to which he replied: 'No, I'm not an optimist. I'm a prisoner of hope'https://t.co/Rsf7VY88FS pic.twitter.com/sAZZOhSGom

She said: “Hope is what you need to combat all the issues that he fought all his life for: discrimination, apartheid, Israel-Palestine, the issues in Northern Ireland, the issues of human rights all over the world, which is why he is so known and loved and why he got the Nobel Prize in 1984.”

"I am saddened to learn of the passing of Archbishop Desmond Tutu," said McDonald.

"His life was marked by a courageous determination to confront and oppose the injustice of apartheid in his beloved South Africa. 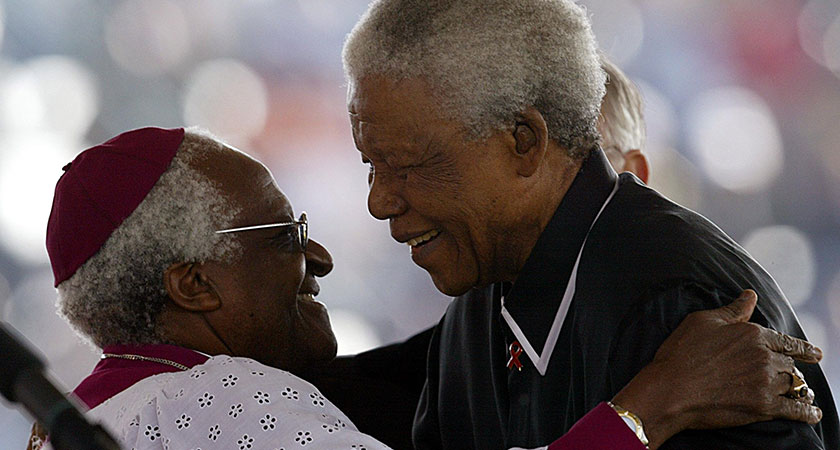 Archbishop Tutu and Nelson Mandela pictured in Soweto in May 2003 (Image: ALEXANDER JOE/AFP via Getty Images)

"He was a defender of human rights and a fearless and outspoken voice for the marginalised worldwide.

"A friend to Ireland, he strongly supported the Irish peace process and came to meet political leaders in 1998, and a number of times after the Good Friday Agreement was ratified.

"He will also be remembered for how in 1984 he invited the heroic Dunnes Stores anti-apartheid strikers to meet with him in London on his way to receive the Nobel Peace Prize.

"On behalf of Sinn Féin, I wish to pay tribute to Archbishop Tutu who was highly respected in Ireland, and across the world, and whose legacy of fighting injustice and defending human rights will never be lost or forgotten."

"Archbishop Tutu knew that the only foundation for reconciliation is truth," said the Foyle MP.

"He sensitively did all he could to acknowledge the difficult journey his country had travelled and through his work on the Truth and Reconciliation Commission he worked to help heal the wounds inflicted on his people. 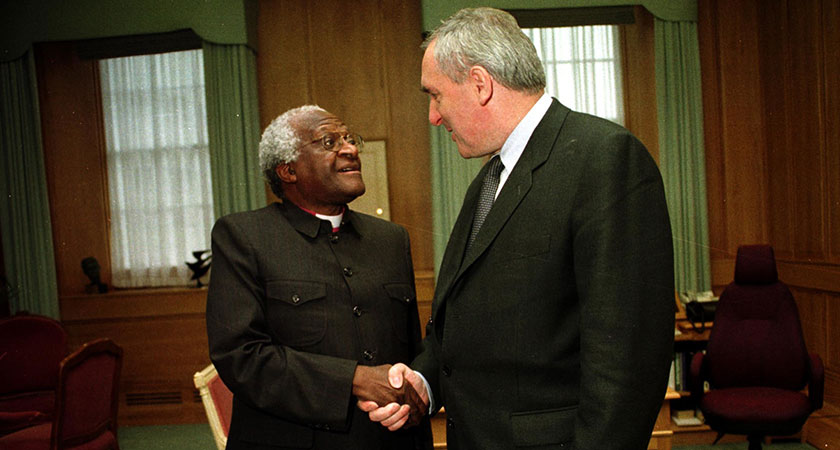 "He also became a familiar face in Ireland — not just through his work in South Africa, but through his attempts to help in our own peace process in any way possible.

"I know his commitment to peace and justice served as an inspiration to many within the SDLP and he was held in the highest regard by his fellow Nobel laureate John Hume."