A MANCHESTER community has come together to fund a final tribute for a teenage boxer who took his own life.

Despite being known as ‘The Champ’ to friends, family and members of his local boxing fraternity, Macauley Moran was at times overcome by depression - a condition which ultimately led to his death.

This week, as his family mark just eight months since the 16-year-old passed away, the community that loved him held a fundraiser to cover the costs of his headstone.

“It’s been a difficult few months since Macauley’s death,” his father Mario Conway told The Irish Post this week. 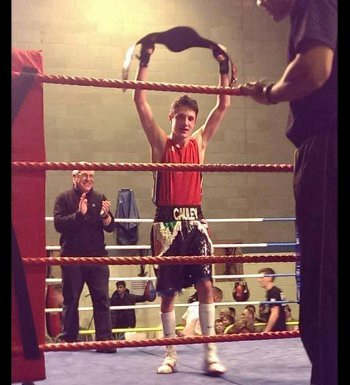 “He passed away in September, so it’s not even a year yet, but it’s time to think about his headstone and the boxing community said they wanted to get the biggest and best for Macauley – they say he’s a champion and that’s what he deserved.”

Hundreds of supporters turned out for a special Macauley Moran Memorial Boxing Show, held at St Kentigern’s Irish Club, on Saturday, May 16, where more than £6,000 was raised.

The Fallowfield club was also the last venue where Macauley boxed in Britain before he took his own life on September 21, 2014.

Shortly after that bout, the young boxer - whose grandparents hail from counties Limerick and Mayo - was sponsored by the club.

The deal saw him receive a new pair of designer shorts – bearing an Irish tricolour – which he would sadly never wear.

As his memory was honoured in Manchester over the weekend, his father revealed how hard it has been for the family to come to terms with their loss.

“He was a good lad, he was kind to older people and really cared for them. He looked after his mum and fought with his siblings, like any teenager really,” he added.

“But he did have a very severe case of ADHD, in fact it was as bad as it can be,” he explained.

“Unfortunately that meant he had some trouble at school, he also suffered with depression and sadly that depression got better of him in the end.

“I’m not sure that’s something we will ever get over.”

Despite Macauley’s condition he was a remarkable force in the ring and was the North West 58kg belt-holder at the time of his death.

Having started training at age of 10, he was competing by 11. 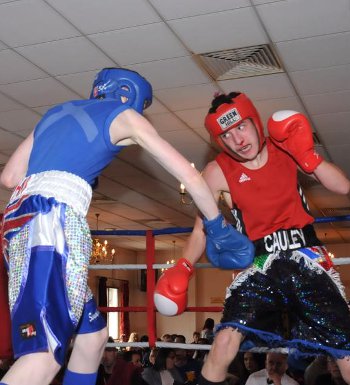 Macauley (in red) was "outstanding" in the ring

He first boxed for the Moss Side Fire Station club, before moving to Gorton Boxing Club but ended his career at St John’s Boxing Club in Chorlton.

And it is St John’s’ Andy Rea who was the driving force behind the memorial held over the weekend.

“The boxing community here have been so supportive since Macualey’s death,” Mr Conway explained.

“It’s amazing how much they club together, Andy Rea at St John’s, for example, has led everything to put this memorial night on,” he added.

“It does help to remember him on a night like that, as the champion he was,” he added.

“Macauley was a different type of boxer, he stood out - you knew a war was about to happen when he got in the ring.

“But it’s still hard. We miss him. I miss watching him box and I miss telling him off - believe it or not you do miss that.”

At the time of his death Macauley, who has two brothers and two sisters, was living at the family home in Withington with his parents and siblings.

A total of 17 boxing bouts took place on the night, which also saw St Kentigern’s Manager Kevin Fitzpatrick specially presented with the designer boxing shorts he purchased for Macauley.

Now framed, the shorts will go on display in the club.

Following the event, more than £6,000 has been raised for Macauley’s headstone – which the family hope to place at his grave in Manchester’s Southern Cemetery ahead of his one year anniversary this September.

The Macualey Moran Memorial Boxing Show will now become a bi-annual event, with future funds raised being donated to a charity chosen by Macauley’s family.