STORM JORGE is set to hit Ireland this weekend, and if Met Eireann's latest forecast is anything to go by, the country is going to get absolutely battered.

Having already faced Storm Brendan, Storm Ciara, and Storm Dennisr, Ireland is about to face its fifth storm of 2020-- and it's still only February.

Met Eireann have released nationwide yellow and orange warnings for galeforce winds and torrential rain between late on Friday night until Sunday morning, and with much of the country already suffering from floods after the last storm, Storm Jorge could devastate the country.

Galway, Mayo, Clare and Kerry have been issued with a Status Orange wind warning from 6am Saturday until 3am Sunday, with Met Eireann warning of "severe winds" and an elevated risk of coastal flooding.

A Status Orange wind warning has also been issued for Donegal, Leitrim and Sligo for the same reaons, including the risk of flooding, from 12pm Saturday until 3am Sunday. 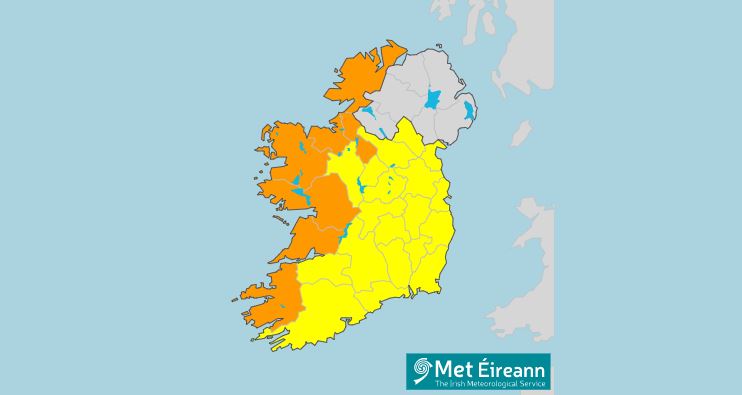 The entire Republic has been issued with weather warnings (Met Eireann)

Cavan, Monaghan, Roscommon, Cork, Limerick, Tipperary and Waterford, as well as the entire province of Leinster, have been issued a Status Yellow wind warning from 9am Saturday until 3am Sunday.

And the entire provinces of Munster and Connacht, as well as County Donegal, have been issued with a Status Yellow rainfall warning, with the meteorological service forecasting rainfall between 20-30mm in 24 hours, with 40-50mm possible in mountainous areas.

Met Eireann have warned of "a continuing risk of flooding due to already saturated ground and elevated river levels", with the rainfall warning in place from today until Saturday night at 11.59pm.

For the full forecast, or a county-by-county breakdown, you can visit Met Eireann's website.