TEMPERATURES are expected to drop below freezing this week as Met Éireann warn that the mercury could drop as low as -3 degrees in parts of the country.

Brace yourself for a cold snap, folks.

Just when you get through January, and convince yourself that the warm afternoons aren't all that far away, we get a lovely little reminder of just how bleedin' freezing this time of year can be.

Met Éireann have warned that temperatures will drop to about 1 or 2 degrees tonight, and predict that Tuesday night will be even colder, with the country anticipating colds of up -3 in central parts of the country. 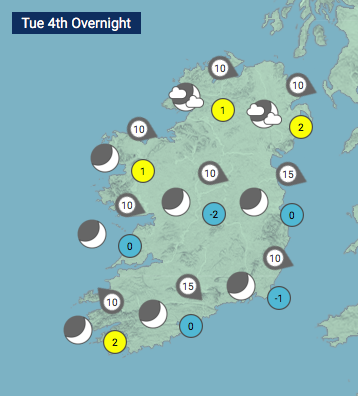 The week will supposedly be fairly dry, though you can expect a fair few frosty mornings, and the Met have asked road users to drive with caution.

Wednesday will be little warmer, with the mercury expected to rise to around 10 degrees during the day, but it'll drop back down to close to freezing once the sun goes down.

Windy conditions are predicted over the weekend too and rainfall is expected in the west of the country towards the end of the week.

But if you're out at night in parts of west Leinster and north Munster, be sure to remember your scarf, gloves and heck - a portable electric blanket (if they exist).