Lisa Mulvey and her husband Steve with their daughter at the their home in St Neots, Cambridgeshire.

AN Irish mother living in Cambridgeshire has told The Irish Post of her horror after her baby's bedroom window was shot at with an air rifle.

Earlier this week Lisa Mulvey, who hails from Co. Wexford, and her husband Steve, from Drogheda in Co. Louth, heard a "weird" sound over their baby monitor, coming from her 15-month-old daughter's bedroom.

"We were downstairs, we could hear through the baby monitor what sounded like popcorn,"  the 31-year-old said.

"I went upstairs to check her room," she added, "and the window was shattered."

Thankfully, the puncture to the glass didn't penetrate the whole way through the glazing.

However the couple, who only moved to the area in June, were left "very shaken" by the incident, which happened while their daughter was lying in her cot near the window. 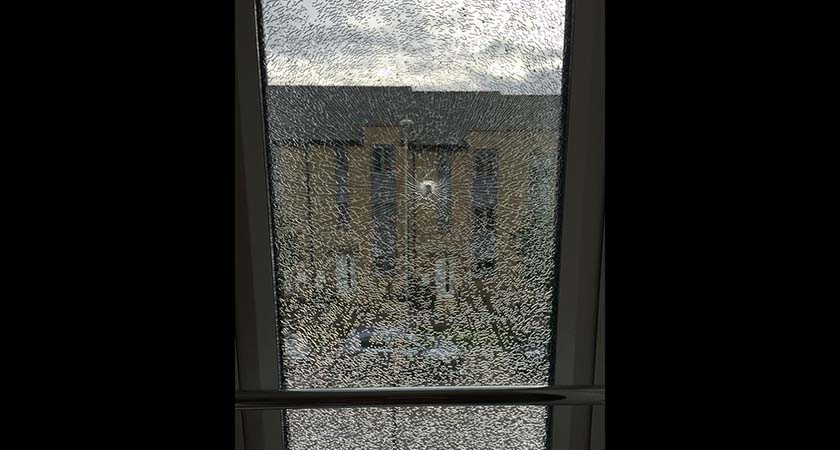 Today Cambridgeshire Police confirmed to The Irish Post that they are now investigating the incident.

"We received reports that between 9.30pm and 10pm on Wednesday, September 21, what is believed to be an air rifle was shot towards a home in St Neots," a spokeswoman said.

Earlier this year, Cambridgeshire Police appealed for information relating to similar incidents in the area.

A series of windows and a security light in St Neots had been smashed on a number of occasions between November 2015 and March 2016.

PC Carl Harris of Cambridgeshire police said that, “in almost all of the instances" a pellet gun or catapult was used.

After the incident Mrs Mulvey said that the whole thing had been "quite scary".

"These people don't know who's behind these windows and in our case, it was our little baby," she added.

Anyone with information on the incident earlier this week, should call the police on 101 or Crimestoppers anonymously on 0800 555 111.

Pensioner, 78, jailed for three years for shooting dead his great-grandson, 6, with air rifle