One mum's lengthy 14-point list of requirements for a babysitter has gone viral online for all the wrong reasons.

The unnamed mother's extensive list of demands for anyone hoping to gain employment as the primary carer of her young child was first discovered on Facebook.

It's since found its way onto Reddit, albeit with the author's named removed to protect her anonymity.

That may actually be for the best, given the sheer number of requirements that feature.

It's a list that has proven divisive with many online.

Some parents evidently sympathised, arguing that it's only right to be picky considering that you are hiring someone you will need to trust with your pride and joy on a daily basis.

Others saw the list as a touch extreme for a role paying around $10 or £8 an hour.

In any case, the 14-point list of requirements is likely to spark some debate, not least because some of the points on the list appear very specific.

Like the fact, for example, that they need to be a Donald Trump fan. 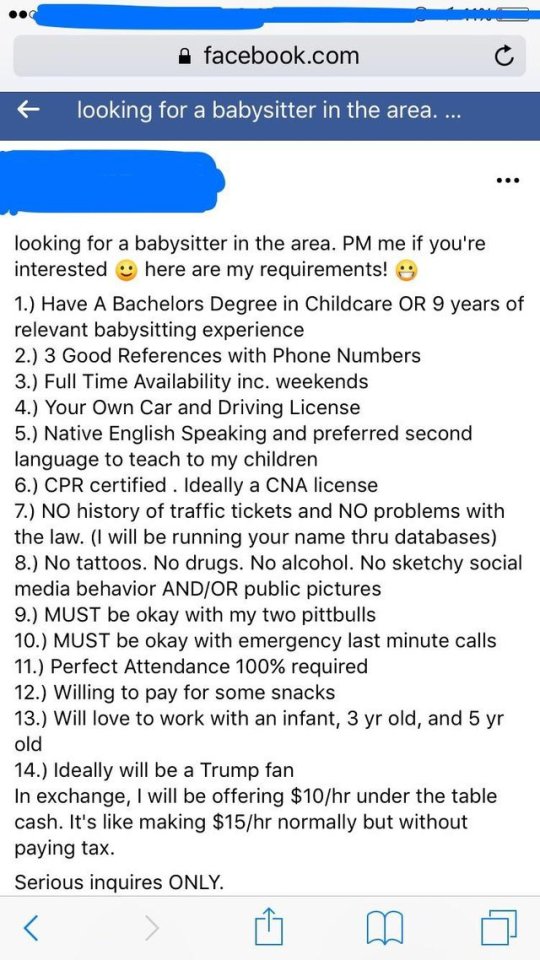 1. "Have a bachelors degree in childcare OR nine years of relevant babysitting experience."
2. "3 good references with phone numbers."
3. "Full time availability inc. weekends."
4. "Your own car and driving licence."
5. "Native English speaking and preferred second language to teach my children."
6. "CPR certified. Ideally a CNA licence.
7. 'NO history of traffic tickets and NO problems with the law (I will be running your name thru databases)."
8. "No tattoos. No drugs. No alcohol. No sketchy social media behaviour AND/OR public pictures."
9. "MUST be okay with my two pitbulls."
10. "MUST be okay with emergency last minute calls."
11. "Perfect Attendance 100% required."
12. "Willing to pay for some snacks."
13. "Will love to work with an infant, 3 yr old, and 5 yr old."
14. "Ideally will be a Trump fan."

Keen to attract as many candidates as possible, the mum goes on to explain that the pay rate is "$10/hr under the table cash" which is apparently like "paying $15/hr normally but without paying tax."

The post has been met with some scorn on criticism, not least because it seemingly encourages tax dodging. Do you know anyone who would be up to the job though?