GARDAÍ IN Dublin have launched a murder investigation following a fatal shooting incident in Coolock which left one man dead.

The victim, named locally as 22-year-old Eoin Boylan, was gunned down outside his home on Sunday evening in a gangland-style attack which Gardaí believe may be linked to an ongoing gang feud in the area.

While a postmortem will not be carried out until later today, it is believed that the young man was shot six times, according to The Irish Times.

Emergency services were called to the scene at approximately 5.15pm yesterday evening, and Mr Boylan was taken via ambulance to Beaumont Hospital where he died from his injuries shortly afterwards. 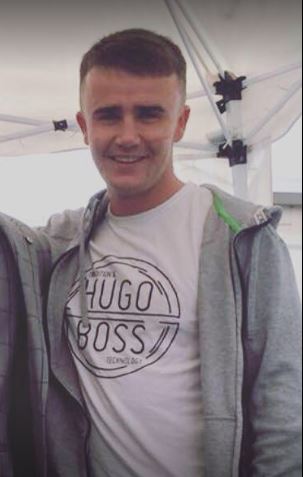 Eoin Boylan was shot several times in the front garden of his home (Photo: Facebook)

A statement released by Gardaí confirmed that a murder investigation has now been launched.

"Members of the Garda Technical Bureau are currently examining the scene and an incident room has been established at Coolock Garda station," the statement said.

"The coroner has been notified and the services of the State Pathologist have been requested. Arrangements are being made for a postmortem examination."

The murder has not yet been confirmed by Gardaí as being linked to the high-profile gang feud in  the area, but should the link be proven it would be the fifth confirmed death from the feud since January of this year.

Anyone who may have been travelling through Clonshaugh Avenue, Coolock between 4.30pm and 5.30pm on Sunday November 24th and who may have dashcam footage of the incident is also encouraged to come forward.