VERDICTS of murder-suicide have been returned at the inquest into the deaths of an elderly Irish couple who died in November last year.

According to RTÉ, both Mr and Mrs Fitzgerald were in their 70s and living in Knockadoon, near Irishtown in Co Mayo.

Kitty Fitzgerald was found dead in a pool of blood and her husband's body was discovered beside a bottle of weed killer at their rural home near Irishtown.

Their son Paul was also treated for serious head injuries.

The inquest in Castlebar heard how gardaí were alerted to the scene at Knockadoon by the girlfriend of Paul Fitzgerald when she was unable to reach him.

She called the emergency services and the armed garda response unit was called to the scene.

Paul Fitzgerald and Aoife O'Gorman were both in court today, and she described how she found her boyfriend sitting on a bed wiping his heavily blood-stained face.

She said there was a deep cut at the back of his head.

Ms O'Gorman said she was bawling crying and Paul was making no sense. He told the court he has no recollection of the events of November 1.

Gardaí told the court how they found Paul Fitzgerald with multiple head wounds and black eyes, and he was conscious but disoriented.

When Mr Fitzgerald refused to take his hands out of his pockets he was tasered and fell to the ground, gardaí said.

Gardaí then entered the house and found a body later identified as Kitty Fitzgerald, face down in a pool of blood in the hallway.

She was in her pyjamas with the family dog by her side. 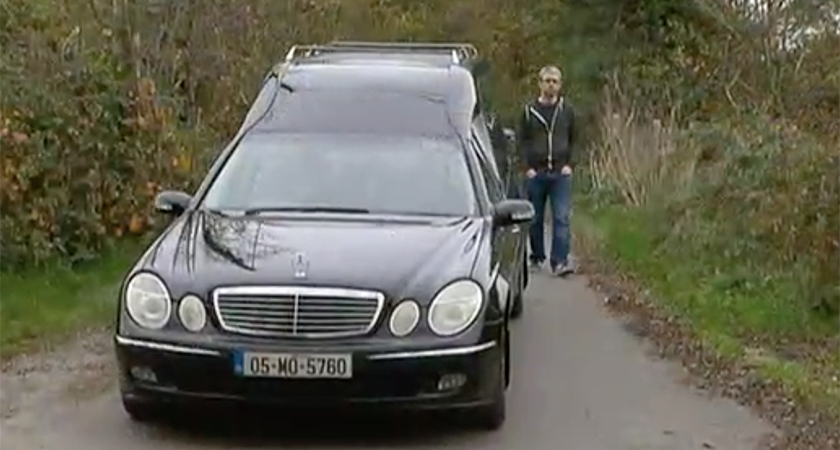 The bodies of Mr and Mrs Fitzgerald were removed from the scene at their home following the incident last year. (Picture: RTÉ)

Her injuries were consistent with severe blunt force trauma to the head. A craft knife was on the locker of the bedroom nearby.

The duvet was drenched in blood.

On examining the surrounding area, gardaí discovered a body later identified as Tom Fitzgerald at the back of a storage shed in the farmyard.

His head was buried in a water trough with a weedkiller container by his side. The lid was in his hand.

The inquest heard that a rusty blood stained metal bar was identified as the weapon used to assault Kitty and Paul Fitzgerald.

The inquest also heard how Mr Fitzgerald's death was self inflicted and the cause was as a result of ingesting a corrosive fluid.

Ms O'Gorman told the court she was only going out with Paul for a number of months and described him as a private person.

He told her he was adopted but said it was never an issue and he regarded the Fitzgeralds as his parents.

He did some painting and decorating work with his father and told his girlfriend how his Dad had been in bad form in recent times and he was back on his tablets for depression.

Giving evidence, Mr Fitzgerald told the court how he was reared in Mayo but was living in Galway. He has a degree in Fine Arts and Sculpture from Limerick School of Arts and Design.

He said his parents had a strong relationship but his father had suffered from mental health issues on different occasions.

Paul Fitzgerald visited home regularly and had just been back to paint the house the previous weekend.

He described his father as a "man's man" who told him that depression was passed down in his family.

Paul Fitzgerald said he lived a low key life now and has no memory of what took place leading to the death of his parents on November 1 last year.