New book reveals the Irish experience in Britain since 1957

A LONG-AWAITED book documenting the Irish emigrant experience in Britain since 1957 will be formally launched in London this week.

Patricia Kennedy’s Welcoming the Stranger will be revealed at the Irish Embassy in London at a private reception hosted by Irish Ambassador Dan Mulhall.

The book charts the history of the Irish Emigrant Chaplaincy organisation and its work providing welfare assistance to Irish migrants in Britain since it was formed in 1957.

In development over the past ten years, the much-anticipated title, by writer and researcher Dr Patricia Kennedy, features chapters on The Church and Migration, how the Irish Chaplaincy influenced housing policy in Britain and the formation of the Irish Council for Prisoners Overseas.

“Writing this book was an incredible journey,” Dr Kennedy admits.

“The project was the brainchild of Father Alan Hilliard, then Director of the Irish Emigrant Chaplaincy Scheme to Britain, who recognised the importance of recording the pioneering work of the men and women who worked with and on behalf of Irish emigrants to Britain,” she explained.

Dr Kennedy, who worked at the Brent Irish Advisory Service in London in 1990, went on to take a position as Senior Lecturer in Social Policy at the School of Applied Science at University College Dublin from 1995 to 2014. 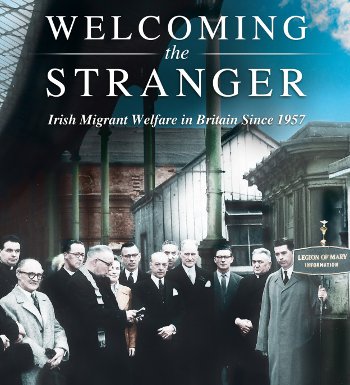 She has made many visits to Britain more recently, while undertaking her research for the book, which included a number of trips to Irish centres in Liverpool, Manchester, Birmingham and London.

Now completed, the book is published by the Irish Academic Press and includes a foreword by Diaspora Minister Jimmy Deenihan, which states: “It’s a pleasure for me to introduce Patricia Kennedy’s work, which examines the very Irish history of Irish Emigrant Chaplaincy to Britain.”

He adds: “The legacy of Irish emigration to Britain is immense. Britain has been the largest area of Irish emigrant settlement since the 1940s and the Irish Diaspora in Britain today is unique, not only in terms of its size but also its diversity.”

Regarding the work of the Irish Chaplaincy, he said: “Such organisations provided an invaluable service in supporting the most vulnerable of Irish emigrants.”