LEGENDARY Irish musician Rory Gallagher is to have a statue erected outside Belfast’s Ulster Hall.

The statue will be placed on Bedford Street outside the venue where rock and blues artist Gallagher played many times.

Indeed, Gallagher endeared himself to the Belfast public with a series of shows at the Ulster Hall throughout the 1970s, a time when other musicians refused to play in the city due to the ongoing Troubles in Northern Ireland.

His London-based brother, Dónal Gallagher, praised the “fantastic news” and is delighted the city still holds his sibling in such high regard.

“He lived there for a while in what was a very inspirational musical time for him, and the bond he had with the people was immense,” he told The Irish Post. 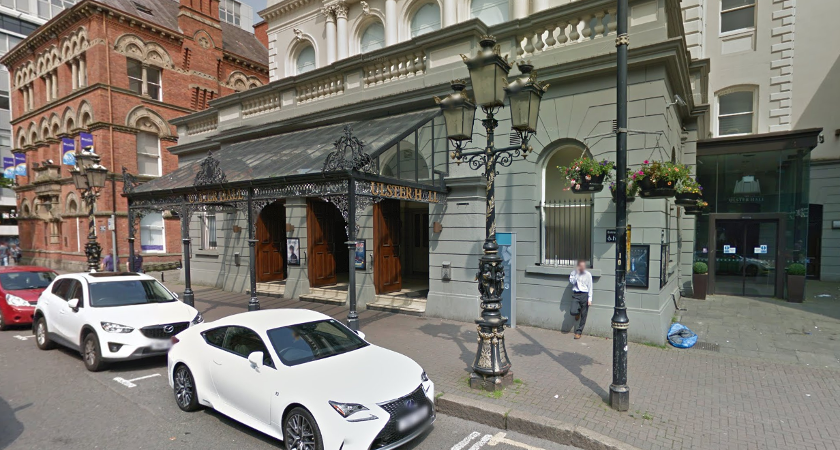 Ulster Hall on Bedford Street, Belfast [Picture: Google Maps]
“I’ve been aware of the project for some time. The Wilgar Community Forum got in touch with me the summer before last and invited me up to their music festival where they had a Rory Gallagher tribute band.

“So I went along to that and they told me the ambition they had. So I said ‘great’ and told them to let me know if there is anything I could do to help with the momentum. But I’ve pretty much just left them to it.

“It’s one from the heart from the people of Belfast at the venue where they so often heard his music. People from that generation are quite keen that he is remembered and there’s no better place than at the Ulster Hall.”

Rory Gallagher, who was born in Ballyshannon in Donegal before being brought up in Cork, died in June 1997 at the age of 47.

The new statue in Belfast will be the latest of many in his honour, most notably in Cork, Ballyshannon and Dublin’s Temple Bar, where a full-scale bronze model of his famous Stratocaster guitar was erected on the re-named ‘Rory Gallagher Corner’ at Meeting House Square in 2006.