THE BREXIT debate is now being fought out on the water as Remain and Leave campaigners traded insults in a bizarre clash on the River Thames today.

Pro-Brexit supporter Nigel Farage was part of a flotilla of over 30 boats organised by Scottish skippers as part of the Fishing for Leave campaign.

The UKIP-led stunt left Kent in the early hours of this morning and was set to pass the Houses of Parliament during Prime Ministers Questions.

However, as they sailed their way up the River Thames, the Leave campaigners were met by Sir Bob Geldof and other Remain campaigners on a few boats who had draped 'IN' banners over Tower Bridge. 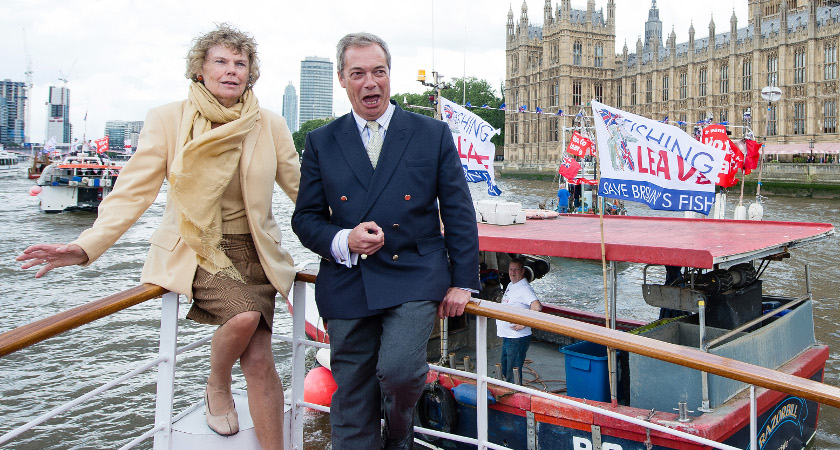 The Bridge had to be opened for 20 minutes to accommodate the Brexit boats, much to the annoyance of motorists.

While the Brexit flotilla was considerably larger, Geldof proved that size doesn't always matter as he managed to drown out the Brexit-ers with a mega soundsystem.

While playing Dobie Gray's In With The In Crowd, Geldof addressed Farage directly as the two boats came side by side.

Geldof shouted: "Nigel! You're a fraud!

"Here are the facts about fishing: One, Britain makes more money than any other country in Europe from fishing. Two, Britain has the largest second quota for fish in Europe after Denmark. Three, Britain has the third largest landings. Four, you are no Fisherman's friend.

So I’m on a Remain boat with Bob Geldof and Rachel Johnson. They’re heading off Nigel Farage’s Thames flotilla. pic.twitter.com/JU3vpuwWtK

"You are on the European Parliament Fishing Committee and you attended one out of 43 meetings.

"You're a fraud Nigel! Go back down the river because you're up one without a canoe!"

The Leave boats responded by spraying the 'In' boat with a hose, in what's been dubbed 'The Battle of the Thames'.

Farage was less than impressed by his rebuke from Geldof, calling the Boomtown Rats singers's counter-protest "disgusting."

When asked what he thought about the 'In' Campaigners response he said: "Disgusting, rich people laughing at poor people.

"They're happy to see this industry go to the wall on a big boat, effectively laughing at working communities being destroyed.  Absolutely disgusting."

Farage was joined on the flotilla by Labour MP and County Antrim native Kate Hoey.

While Geldof was joined on his boat by Remain supporter, Rachel Johnson, writer and sister of Boris Johnson, who is leading the Leave campaign.