A NORTHERN Irish pensioner has received a suspended prison sentence and a restraining order for mowing down an elderly Kerry man in Southampton with his mobility scooter.

Retired Patrick Sheehy, 68, was left with injuries including a broken knee and ankle after 66-year-old James Bradley, of Raglan Court, 11 Winn Road, ran him down on the afternoon of Monday, May 11.

Bradley was charged with grievous bodily harm (GBH) with intent and sentenced this morning at Southampton Crown Court to 16 months in prison, suspended for two years, and received a restraining order for five years.

He was also ordered to pay a victim surcharge of £100 and a Criminal Courts charge of £900. 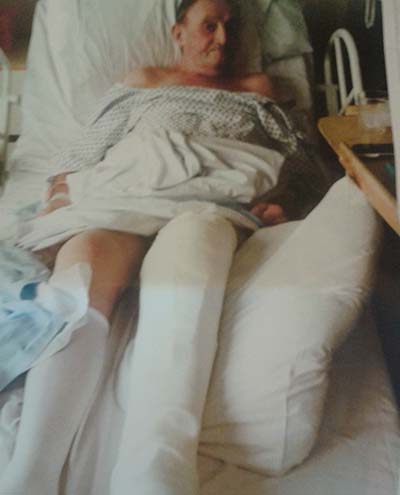 Mr Sheehy told The Irish Post that he was relieved the ordeal was over and that he wanted to thank those who came to his rescue after the incident.

On sentencing, Judge Nicholas Rowland said: “Mr Sheehy was the victim and entirely innocent of any wrongdoing. The bottle of rum found on the defendant may have influenced his behaviour.”

Judge Rowland also made reference to Bradley’s psychological problems during the hearing, in which CCTV footage of the incident was also shown.

Mr Sheehy was run over in May as he attempted to cross Portswood Road at a pelican crossing as he was on his way home for dinner.

The incident occurred outside an ice cream parlour, and a woman intervened to assist Mr Sheehy, who suffers from osteoporosis and required hospital treatment for his injuries.

The first knock by the mobility scooter sent Mr Sheehy, who has been living in Southampton since 1974, to the ground, before it was driven over his leg again.

Bradley, who knew his victim, had alleged that he owed him money.

At a hearing at Southampton Crown Court on December 1, Bradley pleaded guilty to grievous bodily harm, a lesser charge than that with intent.

Judge Rowland said during this earlier hearing that the incident involving the mobility scooter was a “serious and unusual matter.”

Mr Sheehy said: “After the incident I was indoors for 10/12 weeks, I had to get taxis everywhere. I was afraid to go out in case he came after me. I’m not fully confident going out, and my knee keeps giving way.

He does not remember much about the incident as he said it happened too quickly, but he said that the assault could not have been motivated by money.

“There’s no question of money being involved, none at all,” he said. “I knew of him [Bradley] but not well. We’re not friends. I’ve talked to him maybe once but he’s ignorant and arrogant.”