CILLIAN MURPHY fans and lovers of all things 1920s will be descending on Birmingham this September for the first official Peaky Blinders festival.

The Legitimate Peaky Blinders Festival is coming to the UK city on 14-15 September and will boast a wealth of performances and activities designed for fans of the hit BBC series.

Primal Scream, Anna Calvi and The Streets are just a few of the notable music acts set to perform along with as many as 200 actors, who will recreate memorable Peaky Blinders scenes live for onlooking revellers.

The festival is set to take place across the historic streets and factories of Digbeth, where the show is set.

Fashion shows and specially commission dance performances will also take centre stage at what could be the first of many Peaky Blinders festivals to come.

The Legitimate Peaky Blinders Festival is notable for the fact it comes with the blessing and involvement of series creator Steven Knight.

Knight decided to set up the festival after learning of a similar event last year, which was 100% unofficial and drew negative reviews from fans of the show. 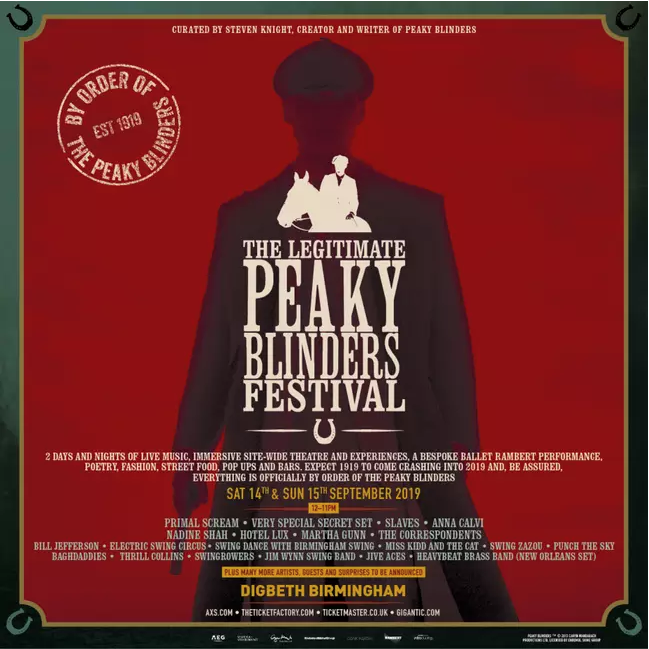 Eager to put on a proper spectacle for the dedicated Peaky Blinders fanbase, Knight began work on the festival and revealed to The NME what fans can expect.

"Ballet Rambert have created a Peaky Blinders ballet that will be performed on the streets and on the main stage," he said.

"There's going to be immersive theatre, discussion groups on how the Peaky Blinders lived at the time in comparison to how things are now. There will be food, a barbershops, tattooists, plus David Beckham's Peaky Blinders clothing line with Kent & Curwen will have a presence there."

Knight also opened up to the BBC about the unique role music plays in the show and why there will always be a place for Irish musicians on the soundtrack.

"I've never been able to define why it is that sometimes you hear a beautiful Irish folk song sung in a really beautiful melodic way and it's still right.

“I think what connects all of those things is the words. The lyrics tease you into this slightly mystical, slightly dark, threatening place, which is where the Peakys live."

Tickets go on sale on August 9, 10am and can be purchased here.