President of Ireland Michael D. Higgins, his wife Sabina and Taoiseach Micheál Maritn pay their respects as they pass the coffin of Queen Elizabeth II, Lying in State inside Westminster Hall at the Palace of Westminster today (Image: Markus Schreiber - WPA Pool/Getty Images)

The pair visited Westminster Hall, where the monarch has been lying in state ahead of her funeral on Monday.

They also signed a Book of Condolence for the Queen at the UK Foreign and Commonwealth Office.

Later today, both men will join other heads of state and overseas guests at a reception hosted by King Charles at Buckingham Palace.

President Higgins and his wife Sabina are due to attend the Queen's funeral ceremony at Westminster Abbey, before the monarch is laid to rest at the King George VI Memorial Chapel in Windsor Castle.

In a statement after her death, President Higgins paid tribute to the Queen, saying her 2011 visit to Ireland 'was pivotal in laying a firm basis for an authentic and ethical understanding between our countries'. 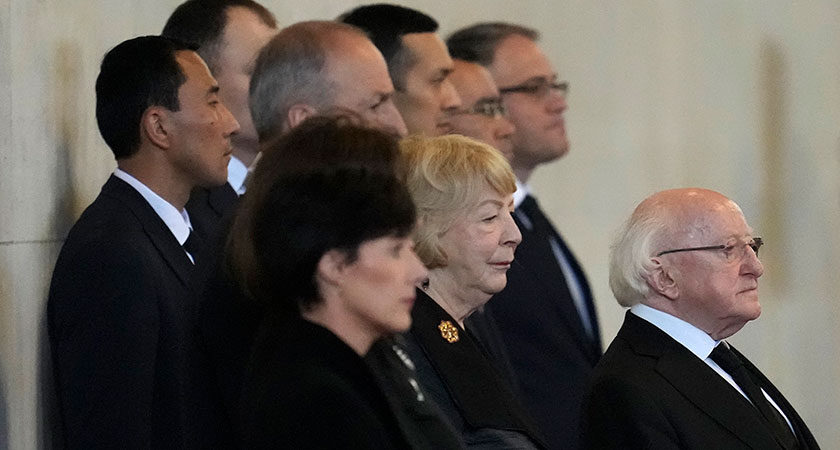 The Taoiseach, meanwhile, also used his time in London to meet with his British counterpart, Liz Truss, on Sunday morning.

No details of the 45-minute meeting have been revealed, however the pair were expected to discuss the issues surrounding the Northern Ireland Protocol.

Speaking at the Irish Embassy after the meeting, the Taoiseach paid tribute to the Queen's 'contribution to reconciliation on these islands'.

"We all recall that historic visit in 2011 which, in many ways, cemented the relationship between our two countries in the modern era," he said.

He added: "I do appreciate the invitation to be here, accompanying the President on such a sad occasion, but also one which also allows us to reflect and recognise Queen Elizabeth's contribution to the quality of life and particularly reconciliation between these islands."