A YOUNG donkey who was rescued from being whipped and tortured on the streets of Dublin last month isfinally living a life free from cruelty.

In February, we reported on this shocking story where a man was reported mercilessly and repeatedly striking a donkey with a thick piece of rope, while parading it down the pavement in the Ballyfermot area of Dublin.

Dedicated animal charity My Lovely Horse Rescue was alerted to the disturbing video by a concerned member of the public and immediately stepped in to help as quickly as they could.

The video was apparently part of promoting an online raffle for the animal, and once MLHR caught wind of the event, volunteers jumped in their cars and frantically searched the area. 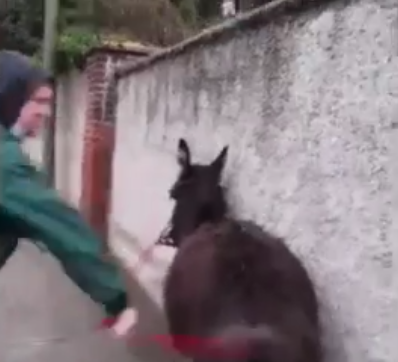 A spokeswoman for My Lovely Horse Rescue revealed at the time that this is the second time callous handlers have attempted to raffle off the donkey, who they've since named 'Mac'.

He had been treated in a "beyond cruel" way, was "traumatised" and had a leg injury when he was found by MLHR volunteers, but he was finally safe.

The video of Mac's horrific treatment is extremely hard to watch-- but the newest video is bound to put a smile on your face.

Mac can be seen, looking strong and healthy, standing in a field among blooming daffodils and being offered flowers by My Lovely Horse Rescue's youngest volunteer, toddler Finn.

"He was dragged and whipped through Ballfermot and Clondalkin. We searched for hours before eventually finding him and removing him to safety.

The update on Mac drew an outpouring of love from animal lovers across Ireland, many of whom had been horrified by the story of Mac's rescue just last month.

One woman, Noreen Tobin, wrote "My heart broke when I saw the original post about Mac, so happy to see him now, living the life he deserves."

Another woman, Sandra Chinner, said she was "glad he has been saved", adding "there are so many cruel people out there."

You can find out more about My Lovely Horse Rescue's vital work, or donate to help their many animals, via their website here or Facebook page here.