RTÉ has taken down an episode of Nationwide from its player which featured a photograph of a man in 'blackface'.

Last Wednesday, the broadcaster aired the second episode of a two-part special on the Irish Navy for its 75th anniversary.

During the episode, a photo from a naval employee fancy dress party was shown which appeared to feature a man dressed as a character from the 1993 Disney classic Cool Runnings, complete with blackface.

The following day, RTÉ removed the episode, saying the photo's inclusion "was due to a regrettable oversight".

The episode in question focused on the LÉ James Joyce, an Irish navy vessel which has been operating since 2014.

Presenter Donal Byrne joined the ship’s 50-person crew on a patrol of Ireland’s south and west coasts and asked to them how they liked to relax.

A crew member said that while at sea, they enjoy things like barbecues, quiz nights and fancy dress parties to keep morale up.

While he spoke, a picture was shown on screen, with one employee dressed as a Jamaican bobsledder. 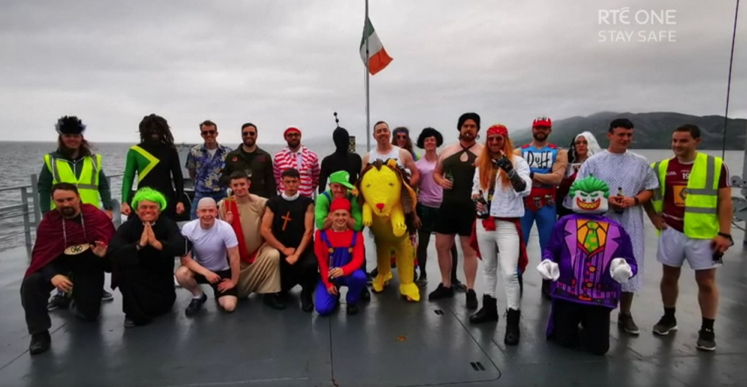 "The photo in question should not have been included in last night's Nationwide programme and was due to a regrettable oversight," said an RTÉ spokesperson, who insisted an edited version of the programme would be published.

An Irish Defences Forces spokesperson said: "Óglaigh na hÉireann developed its first ever Diversity and Inclusion Strategy Statement and Action Plan in 2016, which articulated Defence Forces commitment to diversity and inclusion across various strands of the organisation.

"Any incident that is not in line with the values of our organisation or with our Diversity and Inclusion Strategy Statement and Action Plan will be fully investigated and dealt with in an appropriate manner."

Blackface is when non-black individuals apply makeup so their skin appears darker in order to portray a caricatural black person or a black character.

The practice, which gained mainstream popularity in the US during 19th century is considered highly offensive.

While blackface was traditionally used for derogatory purposes, 21st century sensitivity toward the issue means that darkening your skin to portray a black character - even respectfully - is considered unacceptable.