THERE is no official designation in the Irish Constitution for First Lady, or for that matter First Gentleman – in the case of Mr Robinson and Dr McAleese. You become President of Ireland, and that’s it.

If you’re married, or have a partner, then your significant other is free to accompany you to Áras an Uachtaráin, the official residence in the Phoenix Park – but they have no constitutional role.

Thus the position of the President’s other half is pretty much what you make of it yourself. To date, most of Ireland’s presidential spouses have decided not to make too much of it, opting for a low profile.

So far, there have been seven presidential partners – just one president has arrived at the Áras single. Douglas Hyde’s wife Lucy died shortly before he took on the role as first ever President of Ireland in 1938.

The spouses of subsequent presidents have, so far, mostly chosen to keep out of the spotlight. Sinéad de Valera was a prolific author of children’s books; Cearbhall Ó Dálaigh’s wife Máirín was an Irish scholar and Maeve Hillery a doctor – but they kept out of the public eye.

It was Erskine Childers’ wife Rita who, to date, has had the highest profile. She enjoyed great popular support and came within a whisker of becoming president herself after her London-born husband died of a heart attack in 1974.

Of the last two spouses, Senator McAleese really only came to the notice of the public after he was nominated to the Seanad by Taoiseach Enda Kenny in 2011, while Nick Robinson largely steered clear of politics.

He is best known as a cartoonist, historian and solicitor, and remains active in the community helping to establish bodies such as the Irish Architectural Archive, the Birr Scientific and Heritage Foundation and the Irish Landmark Trust.

The current presidential partner is Sabina Coyne, and it’s probably fair to say that there has never been a candidate for that role as willing, enthusiastic and resourceful as she is.

“If it happens [that Michael D is elected] it would be the greatest joy of our lives – for him to be able to serve and for me to be by his side,” she said during the presidential campaign.

Sabina was born in Cloonraine in Co Mayo. Both she and Michael D, her then husband-to-be, grew up on west of Ireland farms.

At 18, Sabina moved to Dublin to work in the office of the Land Commission. She began to study acting, being mentored by Deirdre O’Connell, an Irish-American actress and folk singer who had trained at the Actor’s Studio in New York.

Sabina was later bridesmaid at Deirdre’s wedding to singer Luke Kelly of the Dubliners.

Subsequently, with Deirdre, she became one of the founder members of the Focus Theatre where she worked with the likes of Mary Elizabeth Burke Kennedy, Joan Bergin and many others. 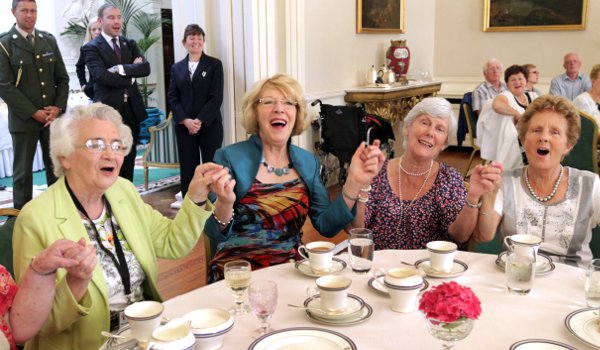 As an actress, she appeared in Insurrection (1966) an RTÉ production about the Easter Rising, broadcast on the 50th anniversary of the rebellion. Her latest role, some 48 years later, also had great political significance.

At the Larkin Hedge School 2013’s ‘Solidarity Gathering’ in Liberty Hall Theatre, Dublin, to commemorate the Dublin lock-out of 1913, Sabina performed readings from the works of Maud Gonne, Countess Markievicz – and also recited an extract from Louis Bennett’s The Irish Citizen.

Sabina met Michael D. Higgins at a party in Dublin in 1969 – at the flat of Mary Kenny – writer, historian, columnist and feature writer.

Sabina had been brought along on the evening by Mary’s sister Ursula. And it was there that the President first laid eyes on this ‘willowy young woman with long flowing blonde hair’.

“He said all I wanted to say so clearly, so I reached out and held his hand,” Sabina has said of this first encounter.

In 1974 Sabina and Michael D were married in Dublin’s Haddington Road Church, later moving to Galway where Sabina continued her theatre activities and community arts projects, working with Druid, An Taibhearch and other groups.

Mrs Higgins has long been passionate about education, and has helped set up community initiatives in Galway, as well as promoting Parents’ Councils locally and nationally as a means of promoting parents as partners in education.

She went back to college for her Masters in drama when she was 60. She has continued to nurture theatre and the arts in her time at Áras an Uachtaráin, and seems likely to expand that role.

Running parallel with her theatre and community work, Sabina has helped and supported Michael D in every political campaign he has embarked on over the last three decades; there have even been suggestions that she was the true driving force behind his presidential bid.

During her campaigning on the presidential trail, Sabina made a statement with the way she dressed.

She never failing to reveal that she bought locally, and supported home-grown businesses and designers including Louise Kennedy, who designed the off-the-peg purple outfit Sabina wore for her husband’s inauguration.

Since her husband’s election, Sabina Higgins has maintained an independent stance. Earlier this year she visited Aosdána member and peace activist Margaretta D’Arcy in Limerick Prison. The visit took Sabina into something of a moral and political maze.

Some fiercely defended her right as a citizen to visit a friend in jail. Others argued that her rights and duties, as citizen and friend, now have to be balanced against her duties as the wife of the President.

But of course, as has already been pointed out – the constitution provides no role for the spouse of a president, so that’s a difficult argument to sustain. Michael D’s verdict on the prison visit was: “Sabina is a person who can speak for herself and is a person of very good judgment.”

Michael D has often stood up against imperialism, injustice, inhumanity and what he sees as human rights abuses in other countries as well as in Ireland. He has already proved to be more than a figurehead president, having spoken out on a range of issues – issues that some believe are beyond his remit. It seems his wife is very likely to be as radical in her role as president’s wife.

The Higgins are a devoted couple and are evidently, even touchingly, dedicated to each other, often pictured holding hands.

Michael D says of his wife: “She is somebody I regard as a rock, somebody who I would keep coming back to and whom I wouldn’t have to be explaining myself to either.”

Perhaps then, it will not be possible, nor would it be right, to place constraints on a woman who can potentially become the most influential First Lady we have ever had.