SHOCKING footage has emerged of the moments after an easyJet passenger allegedly headbutted a flight attendant on a delayed flight.

The incident was filmed onboard a plane sat on the tarmac at Charles de Gaulle Airport in Paris last night.

In the video, airport security staff can be see grabbing the enraged passenger by his neck and pinning him to the floor of the aircraft.

Moments earlier, it's claimed that he had physically assaulted a male member of cabin crew who appears visibly shaken.

Other passengers on the Mallorca-bound flight are heard shouting and urging calm as the confrontation unfolded. 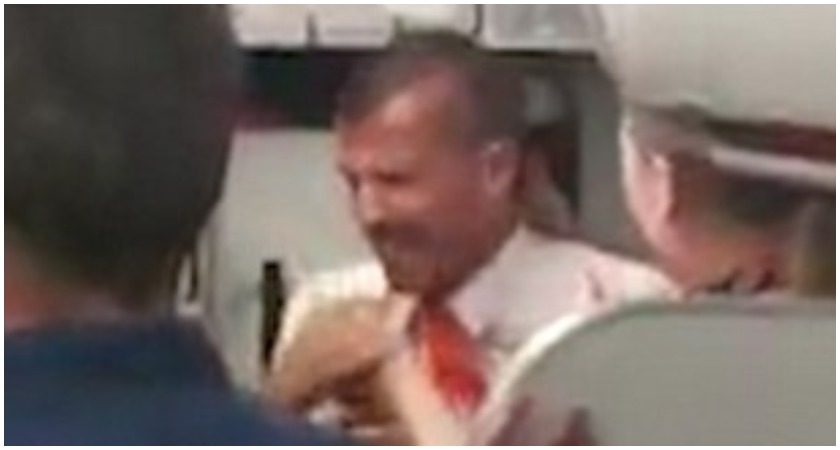 After being overpowered by security staff, the man was hauled off the flight and arrested by French police.

According to witnesses, the man had become aggressive after being asked to leave the plane along with a group of men over concerns about their behaviour.

Emma Derisson posted the footage on Twitter, with the caption: "A delay of 2 hours and lamentable behaviour aboard which resulted in traumatic violence overflowing for all passengers at @ParisAeroport ... what do you say @easyJet? #scandal #customers".

However, the flight was cancelled in the wake of the incident and passengers were later informed it would be rescheduled from 11am the next day.

In a statement, an easyJet spokesman said: "easyJet is aware of this disruptive passenger incident which was extremely distressing for the crew and passengers onboard.

"The police were called to assist the crew in dealing with the incident and arrested the passenger.

"We will not tolerate threatening or violent behaviour towards our crew and will be pushing for prosecution.

"We are doing all possible to support the crew members who were subject to this unacceptable behaviour.

"The safety and wellbeing of our passengers and crew is easyJet’s highest priority."