SOCIAL LOCKDOWN: Bars and restaurants could be forced to close under new Covid-19 restrictions

PUBS and restaurants could be closed across Britain in a bid to curb the spread of Covid-19 it was revealed over the weekend.

A report by The Times claims new lockdown measures being considered by government ministers would see pubs, restaurants and bars ordered to shut for two weeks initially, to combat a second wave of the deadly virus in Britain.

The emergency lockdown plan would also ban households from meeting each other in any indoor location, The Times reports, however schools would stay open as well as shops, factories and offices at which staff could not work from home.

The report comes a week after Prime Minister Boris Johnson revealed new Covid-19 restrictions for England - which included extending the mandatory wearing of facemasks and imposing a 10pm closing time for all bars, pubs and restaurants – while stating he wanted to avoid a second national lockdown. 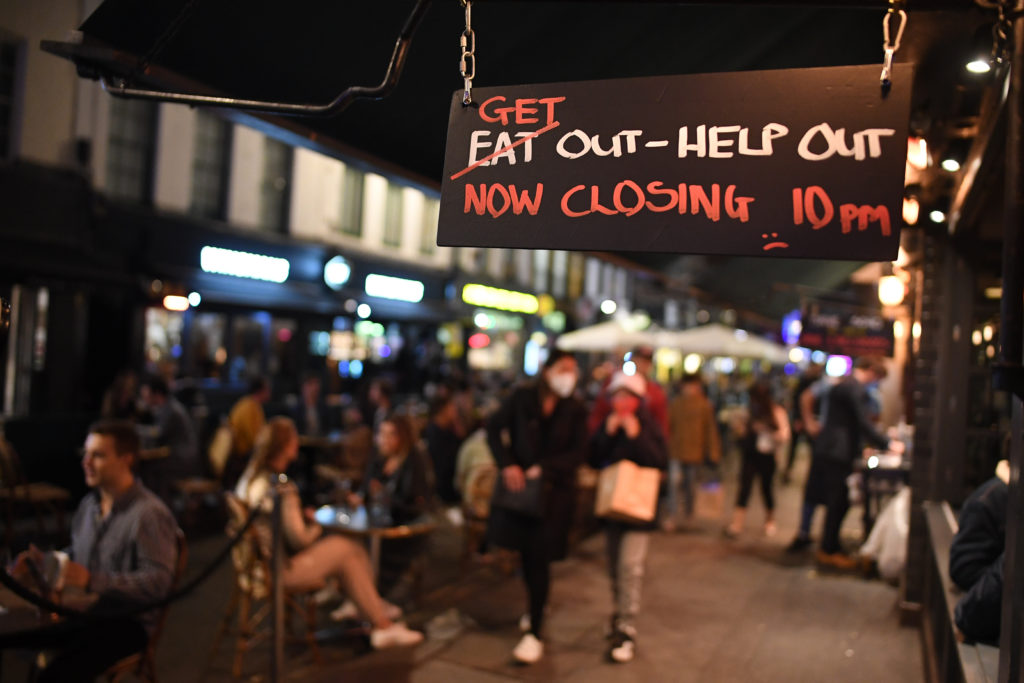 Pubs, cafes and restaurants in England currently have to shut at 10pm every night under new measures to control the rising rate of coronavirus. (Photo by Peter Summers/Getty Images)

Announcing the latest restrictions on September 22, Mr Johnson said: “I am deeply, spiritually reluctant to make any of these impositions, or infringe anyone’s freedom, but unless we take action the risk is that we will have to go for tougher measures later, when the deaths have already mounted and we have a huge caseload of infection such as we had in the spring.”

He added: “If we let this virus get out of control now, it would mean that our NHS had no space – once again – to deal with cancer patients and millions of other non-Covid medical needs.

“And if we were forced into a new national lockdown, that would threaten not just jobs and livelihoods but the loving human contact on which we all depend.”

Those new measures, which have come into effect over the past seven days, include fines of up to £10,000 for those who fail to self-isolate when testing positive for Covid-19.

That law, which came into effect today (September 28) applies to people who have tested positive for coronavirus, or who have been told by NHS Test and Trace to self-isolate because they have been in close contact with someone with the virus.

It also makes it illegal for anyone who tests positive to knowingly give false information about their close contacts to NHS Test and Trace.

As of this week it is a punishable offence not to comply with an official instruction to self-isolate - with fines starting at £1,000 and rising to £10,000 for repeat offenders or serious breaches.