AN AMERICAN man whose bid to evade British police was halted by Irish authorities has been jailed for seven years after stalking one woman and taking another hostage.

Edward Best, 26, flew from Chicago to Manchester, England to stalk a woman he had met online before barricading her cousin in a house while armed with a hammer.

After the alarm was raised, Best fled to Ireland but was detained by security on a plane bound for New York after he was flagged as wanted. 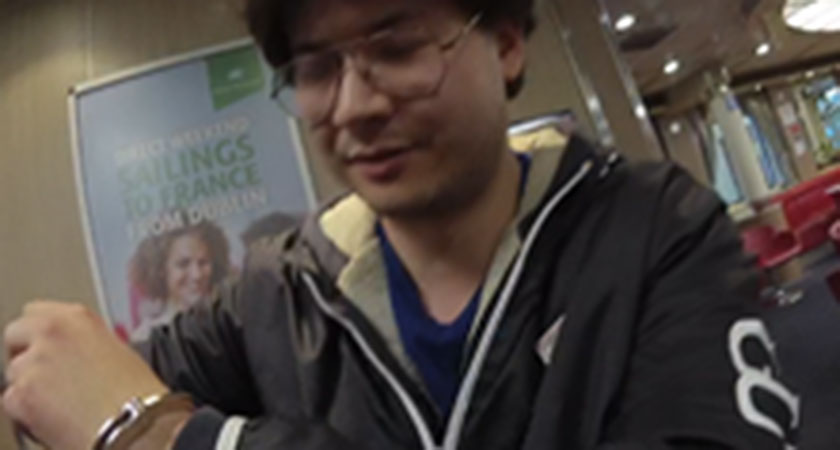 Best is arrested at Holyhead after being escorted to Wales by gardaí (Image: GMP)

He was escorted by gardaí via ferry to Holyhead in Wales, where he was arrested by officers from Greater Manchester Police (GMP).

On Friday, Best was jailed at Manchester Minshull Court after admitting stalking his ex-partner between January and April, false imprisonment, attempted false imprisonment and possession of an offensive weapon.

"The perverse actions of Edward Best were extremely sinister and frightening for both young women, and while this may be an unusual case it demonstrates our ongoing commitment to tackling violence against women and girls in all its forms," said Detective Constable Emily Blair.

Best, who had never met his victim in person, had been in an online relationship with the woman from Hyde, Greater Manchester.

However, when the relationship turned sour, he become increasingly aggressive and obsessive, sending her up to 100 messages a day and threatening to murder her and rape her corpse.

Best flew to Manchester on March 22 and for the next 12 days stalked the woman's address.

On April 3, he broke into her home armed with a hammer, but found only the woman's cousin, who was looking after the family cat while the woman and her family were away for the weekend.

The cousin, aged in her 20s, was then subjected to a frightening ordeal for the next three hours as Best locked the back door and barricaded the front door with furniture.

#JAILED | An American who flew to #Manchester to stalk a woman he met online before barricading her cousin in a house in #Hyde armed with a hammer has been jailed.

Our fugitive finders snared Edward Best (26) as he tried to flee back across the Atlantic: https://t.co/IxwEN3yjfN pic.twitter.com/UL3OKXTiUR

During this time he held a hammer to the victim's face and got black tape out of his rucksack while searching the property.

However, the victim was able to text a friend to get to the address and to call 999.

The friend and their partner arrived and looked through the window to see the victim mouth the word 'help'.

Thankfully, the victim was able to escape through a front window while Best fled through the back door, still armed with the hammer.

Detectives from GMP's Ashton CID along with fugitive finders from the Force Critical Wanted Unit launched a manhunt as Best made his way to Birmingham.

However, after missing his flight to America by 40 minutes, he set off for Holyhead.

He got a ferry to Ireland and boarded a flight to New York but was stopped by security before the plane took off and was ultimately returned to Britain by gardaí.

Best admitted to investigators that he had made online threats to his former partner but did not have any intent to do anything about it.

He also admitted that he did not make her aware he was coming to Britain and acknowledged he had repeatedly harassed and stalked her online.

"It was clear from Best's online conversations with his former partner that he was obsessive and aggressive, meaning that when he went to her home address armed with a hammer it was reasonable to believe his intentions were malicious with the aim of inflicting physical as well as emotional harm," added DC Blair of Ashton CID.

"Fortunately for his ex-partner, she was not in that weekend; however, this by no means diminishes how much she has been affected by what could've happened, and how horrifying the ordeal was that her cousin was subjected to.

"Once Best was found by his victim's friends, his intent was to run away from his crimes and go back to America to avoid the consequences, but our swift response from our specialist team of officers meant we were able to hunt him down and bring him back to Greater Manchester so he can now rightly face justice."