Three Irish sisters give birth to three babies on the same day...and there's one more on the way!

THREE Irish sisters have given birth to three babies on the same day, with a fourth sister also expecting anytime now.

Mairéad Fitzpatrick, along with her two sisters Joeline Godfrey and Bernie Ward, each gave birth at Mayo General Hospital yesterday.

And with sister Christina Murray overdue and expecting her new arrival at any moment the family from Cloonfad in Co. Roscommon will soon be in a position to host the best run of Christening parties ever.

But if their younger brother, who's living in Britain, has anything to say about that - all the fun will take place on the same day.

"It’s just so funny the way it’s happened. There are five of us altogether but there's four of us expecting," Mairéad told RTÉ Radio.

"The brother has just gone back to England. He’s hoping we’ll have the Christening on the one day, that’s all he's anxious about," she joked. 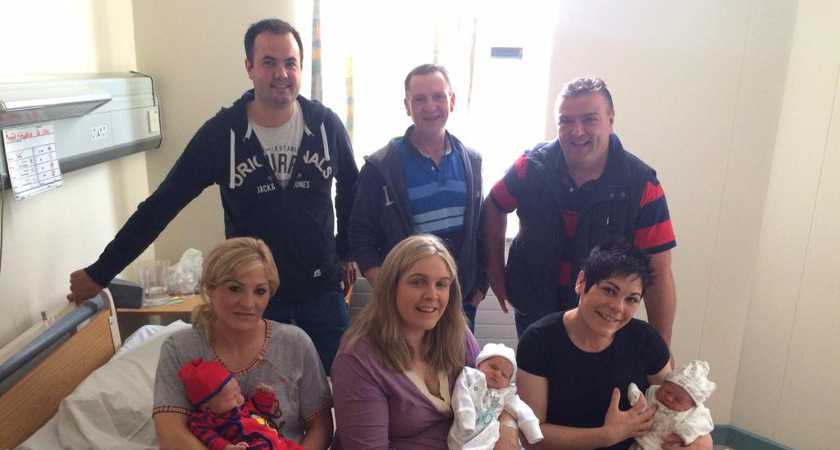 Sisters Mairéad, Joeline and Bernie with Thomás Óg, Sorcha and Phelim and their proud daddies. Picture courtesy of RTÉ

But midwives never expected to have four members of the same family in the hospital in the same week, let along three giving birth on the same day.

"They couldn’t believe it, I’d say they thought it was crazy," said Mairéad who's just had to her first child. "We just never realised it would happen on the one day."

"I was due on Friday the 28th of August, Joeleen was booked in for a section yesterday – it was her second baby. Bernie was due today but had a little boy last night at 8.3opm. Christina is still waiting but was due on Sunday, August 30th."