THREE men have been sentenced to life in prison for the murder of Ahmaud Arbery.

A US state judge in Georgia sentenced Travis McMichael, Gregory McMichael and William Bryan to life in prison for what he described as the "chilling" 2020 murder of Arbery, an unarmed black man.

Judge Timothy Walmsley said that he gave father and son Gregory and Travis McMichael the harshest sentence possible because of their "callous" words and actions captured on video.

He also said the McMichaels had not shown remorse or empathy for Arbery.

The pair now face life behind bars without the possibility of parole, while Bryan, who filmed the assault, and who later expressed “grave concerns that what had occurred should not have occurred", can seek parole after serving 30 years in prison.

The harrowing footage of a Abrery’s final moments – where the 25-year-old came under an armed and ultimately fatal assault while jogging through a mostly white neighbourhood –flashed across phone screens in February 2020.

People in America and Europe were shocked by what they saw – three heavily armed white men hunting down an unarmed black man in a pickup truck.

At a time when conversations about race are dominating America’s cultural and political life, its eerie optics of a ku klux klan mob lynching proved explosive.

"It was a chilling, truly disturbing scene," the judge said of the incident captured on mobile phone footage.

As Arbery is tussling for his life with his Gregory McMichael, the footage shows the younger McMichael raise his shotgun to take an almost point blank shot at the unarmed man.

The defendants said that they thought Arbery was responsible for a local burglary which had just taken place, and so claimed they were making a citizens arrest. 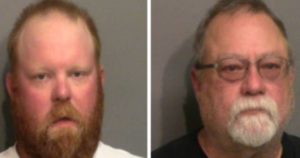 "Taking the law into your own hands is a dangerous endeavour," Judge Timothy Walmsley said in his closing remarks on Friday.

"A neighbour is more than the people who just own property around your house," he continued. "In assuming the worst in others, we show our worst character."

Holding a minute of silence for "a fraction of the time Ahmaud Arbery was running in Satilla Shores", Judge Walmsley said that he "kept coming back to the terror that must have been in [Arbery's] mind".

In a tearful victim impact statement, Arbery’s mother Wanda Cooper Jones said: "This verdict doesn't bring you back, but it does help bring closure to this very difficult chapter of my life.

"I made a promise to you the day I laid you to rest: I told you I love you and someday, somehow, I would get you justice."

The respective lawyers for each defendant have indicated they will appeal the verdicts.