TRIBUTES have been paid to Celtic great Bertie Auld, who has passed away at the age of 83.

The former midfielder was one of Celtic's legendary Lisbon Lions, the first British team to win the European Cup.

Comprising a team of players born within 30 miles of Celtic Park, the Glasgow side defeated Inter Milan 2-1 at Lisbon's Estadio Nacional on May 25, 1967.

Bertie was always at the centre of things, happy to spend time talking about the club & recounting stories of when he & his team-mates were the Kings of Europe & one of the best teams in the world.

Bertie always loved being a Celt & the Celtic supporters loved him in return 💚 pic.twitter.com/aF5EegW55M

Earlier this year it was revealed he had been diagnosed with dementia.

'A giant of a player'

Celtic have led the tributes to Auld, with Chairman Ian Bankier describing him as 'Mr Celtic'.

"The most sincere thoughts and prayers of everyone at Celtic are with Bertie's family at such a difficult time, following this tragic loss," said Ian Bankier.

"I don't think words can ever adequately describe what Bertie meant to the Club and our supporters. 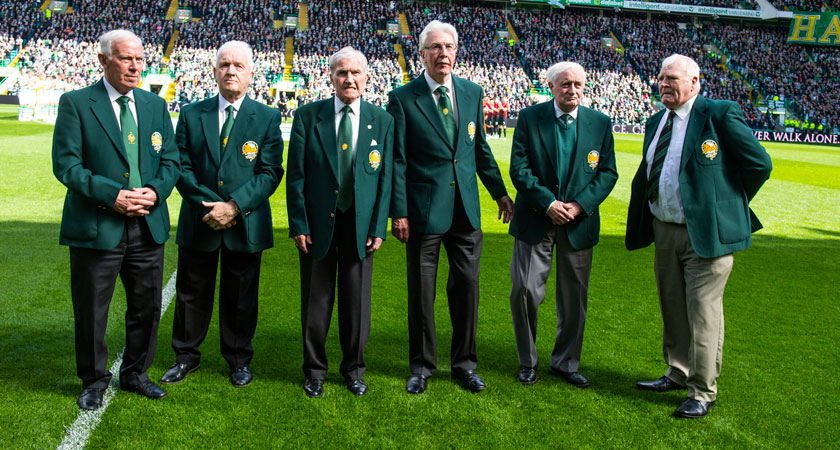 "He scaled the greatest of heights as a player with his talent but it is who he was as a man that made him so much more to us all.

"He enriched all our lives so greatly with his humour, his character and personality and for that we will forever be grateful.

"It was an absolute privilege to have known Bertie and I know just how deeply his passing will be felt by all Celtic supporters.

"We all mourn his passing with great sadness and, of course, we offer our full support to Bertie's family.

"May you rest in peace, Bertie." 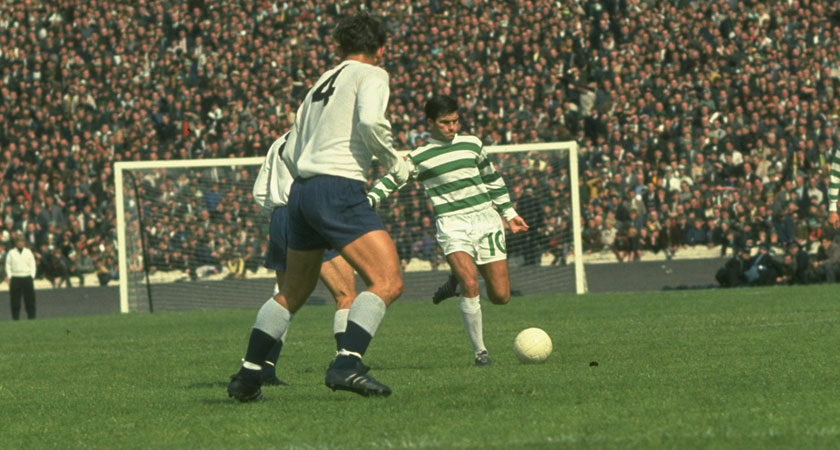 Auld up against Tottenham's Alan Mullery in a preseason friendly in August 1967 (Image: Allsport UK /Allsport via Getty Images)

Auld enjoyed two spells at Celtic either side of a four-year period with Birmingham City, with whom he won the League Cup.

He returned to Celtic in 1965 and formed a productive midfield partnership with Bobby Murdoch.

Under the management of Jock Stein, who arrived at Celtic a few months after Auld's return, Celtic enjoyed unprecedented success on the pitch.

The pinnacle was that famous day in Lisbon, with Auld leading the team in a rousing rendition of The Celtic Song in the tunnel ahead of the game.

Auld and Celtic won all five trophies they competed in that season to seal an amazing quintuple.

He finished his career at Hibs and later managed the Easter Road club, a well as taking charge of Partick Thistle, Hamilton and Dumbarton.

However he remained a familiar face at Celtic Park on matchdays and regularly attended fan events for years after retiring.

Everyone at #CelticFC is devastated to hear of the passing of Lisbon Lion, Bertie Auld and our thoughts and prayers are with his family at this sad time.

Bertie was a legend of the club and he was adored by the entire Celtic Family.

We are deeply saddened to learn of the passing of Bertie Auld. Bertie was a much-loved figure in Scottish football, winning three caps for @ScotlandNT and famously lifting the European Cup with @CelticFC.

The thoughts of everyone at the Scottish FA are with his friends & family. pic.twitter.com/SVk8o4KyNo

We are saddened to learn of the passing of former Hibs player and manager, Bertie Auld, at the age of 83.

Everyone at Rangers FC express sadness and pass on their sympathy to the Auld family and Celtic FC at the passing of former player, Bertie Auld.

The Club is deeply saddened to hear of the passing of former player and 1963 League Cup winner, Bertie Auld.

The thoughts of everyone at #BCFC are with Bertie's family and friends at this difficult time.

Devastating news to hear that Bertie Auld has passed away. Bertie was a real legend, a lion and an absolute gentleman. He was a great player and a charming, funny , funny man. Thoughts and love and prayers go out to Bertie’s family. 🍀💔

It is with very deep sadness that we have learned of the passing of our former player and manager, Bertie Auld, at the age of 83.

The thoughts of everybody at Dumbarton FC are with Bertie’s family and friends at this sad time. https://t.co/HgXOgcIhI0

The thoughts and prayers of everyone here at Hamilton Accies is with the friends and family of Bertie #RIP ❤️ https://t.co/61WJp1dAjg