THE funeral of Warwickshire GAA star Joel Richards, who was killed in the Tunisia shootings more than two weeks ago, will take place today.

Joel, 19, died alongside his grandfather Patrick, 78, and uncle Adrian, 49, in the attack on Tunisians and tourists on June 26. His younger brother Owen survived the massacre.

All three family members will be mourned in a joint funeral at the Holy Cross Church in the Stone Cross area of West Bromwich Friday (July 17) from 12pm.

The coffins will leave the family home in Wednesbury to arrive at the church for 12.15pm. Afterwards, Joel, Patrick and Adrian will be cremated in a private service.

James Connolly’s GAA club, of which Joel was an enthusiastic member, will provide a guard of honour as the coffins leave the church, club president Tony Donahoe told to The Irish Post.

Though the family and friends of the three sports fanatics are struggling with their grief, Mr Donahoe also revealed that, in a way, it is fitting that they will be mourned in the same funeral service.

“Wherever one went, the others went,” he said. “Joel and his brother were always with their grandfather and uncle.”

Patrick and Adrian Evans even accompanied Joel to Co. Kildare five years ago, where James Connolly’s were in a GAA tournament. Joel’s skills as a goalkeeper helped the team make it to Ireland. 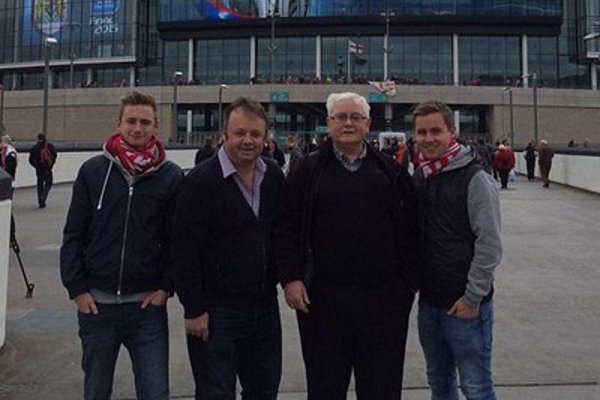 Joel (right) with his grandfather and uncle who also died in Tunisia. His brother Owen (left) survived the attack.

The wider West Midlands community has also been left in shock since the three men’s deaths.

The Mid-Counties Co-Operative Funeral Service has offered to foot the bill for the funeral, with local councillor Darren Cooper saying: “It was the least we could do.”

On Sunday, July 19, family and friends will come together at the local football grounds, Bustleholme, where Joel will be remembered in a charity football game, raising funds in his memory.

Meanwhile, Walsall FC – Joel’s favourite football club – have installed bricks bearing the names of Joel, Patrick and Adrian on the walls of the Banks Stadium in Walsall in a permanent tribute to the trio.

“On behalf of my family, a big thank you. Walsall FC did my son, dad and brother proud,” she said.