ST PATRICK'S Day and whiskey are synonymous with each other.

Legend has it St. Patrick himself, when short-changed on a shot of whiskey, berated a local innkeeper. Declaring his cellar possessed by a devil that fed off his dishonesty. Returning later he found the innkeeper filling every glass to the brim with whiskey after vowing to change his ways.

Cut to today, the Irish whiskey industry is on the up. With the number of distilleries across the country hitting a 120-year high in 2019 and sales expected to grow to 14 million cases this year. It is also gaining global recognition, with an Irish whiskey winning the highly coveted accolade of the world’s best single malt last year.

This comeback comes after a turbulent twentieth century which saw Irish whiskey fall from grace, losing 99% of its market share. Going from the biggest selling spirit globally to near collapse. Production went from 12 million cases to less than 100,000.

The industry, however, has since picked itself up and like the phoenix, is rising from the ashes and beginning to spread its wings on a global scale.

Irish whiskey sailed into what turned out to be a perfect storm of disasters and shocks, which brought the industry crashing down to its knees. Back in 1914, Ireland was under British rule and the First World War broke out on the continent. To help the war effort, barley, crucial to making Irish whiskey was re-directed from distilleries to support the war effort and feed soldiers on the western front. This was coupled with the fact that German U-boats were patrolling the waters around the British Isles, making it far too dangerous for global exports.

It doesn’t stop there, during the First World War, the Easter Rising led to many large Dublin distilleries closing as they were taken over by rebel forces. After the war, production and exports were able to continue. Then in 1919 came the Irish War of Independence.

Just as things couldn’t get worse for the industry prohibition came into force in the US. Shutting off one of the major markets for Irish whiskey. Looking to make headway in the global market, the British then offered a parting gift to the new Irish Free State. Banning exports of Irish whiskey to the Commonwealth, eliminating much of what was left of the global market. In turn allowing Scotch whisky to flourish. 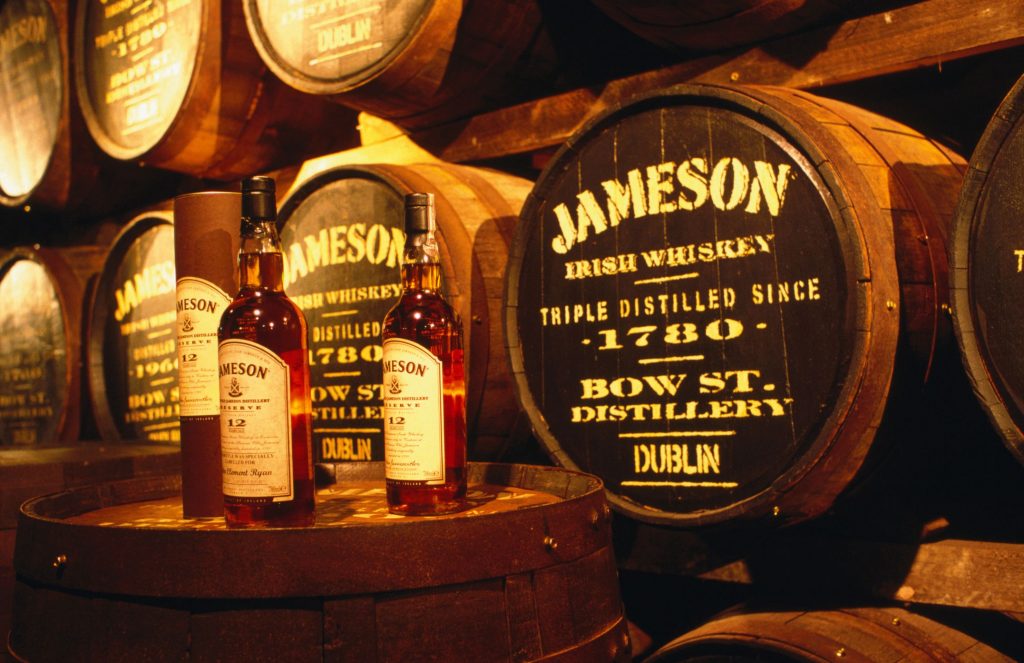 Then there were four

After all this turmoil, only four distillers survived (John Jameson, John Powers, Cork Distillers and Bushmills). Hundreds had gone bankrupt.

The remaining four Irish distilleries stayed local and avoided going global again and so, not actively challenging to reclaim the lost global market share. Merging the remaining few distilleries in Ireland, into Irish Distillers (IDL) created a monopoly for over three decades. This gave them total control of every single drop of whiskey produced across all of Ireland. Production remained grow to two million cases per year by the late 1980s.

The Irish whiskey industry slowly began to build its way back up when Pernod Ricard bought IDL in 1988. The new owners were eager to expand and invested in on the ground salespeople that helped boost the Irish whiskey market by double digits annually.

The Irish whiskey industry is now primed to continue its growth to help reclaim much of its lost market share. As demand rises amongst consumers. With drinkers increasingly choosing whiskey as their spirit of choice.

I’ve always thought of Irish whiskey as liquid gold, and so it is great to see consumers and investors around the world turn their heads to it.

Long may this continue, for should it disappear St Patrick’s day in the future would be a diminished spectacle: for the loss of one of its most iconic elements, which should always be served in a full measure!

Jay Bradley is the founder of The Craft Irish Whiskey Co. and Whiskey & Wealth Club