AS A presenter, Gay Byrne was ahead of his time.

However, even Uncle Gaybo got things wrong now and then, as a letter written by the beloved Late Late Show host back in 1996 demonstrates.

Asked by students from Loreto Primary School in Rathfarnham, Dublin to make some predictions about what Ireland will be like by the year 2020, Byrne did not disappoint.

Part of European Nature Conservation Year 1995 time capsule project, Byrne’s letter was locked away in the capsule and subsequently buried – until now.

Dated January 24, 1996, the letter has now been opened, offering up a string of fascinating predictions which, while largely incorrect, are not entirely wide of the mark.

“With the climate changes we’re experiencing now by 2020 we’ll be growing Mediterranean fruit and vegetables and Ireland will be a little paradise island in the Northern Atlantic.

“Cars will be banned in Dublin City and LUAS will be the only city transport. 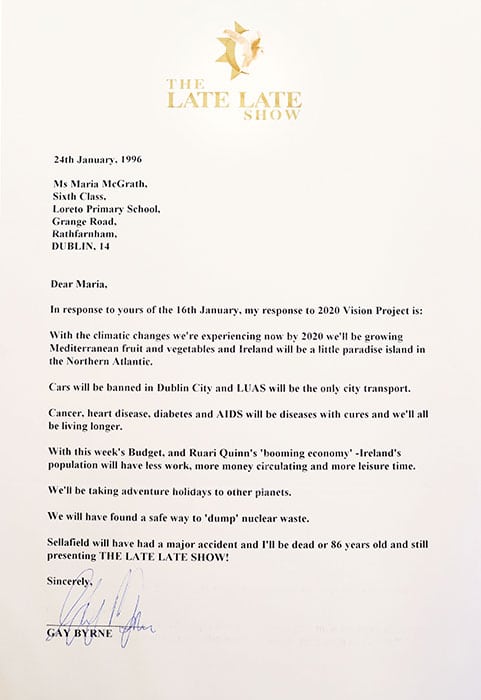 “Cancer, heart disease, diabetes and AIDS will be diseases with cures and we’ll all be living longer.

“We’ll be taking adventure holidays to other planets.

“We will have found a safe way to “dump” nuclear waste.

“Sellafield will have had a major accident and I’ll be dead or 86 years old and still presenting THE LATE LATE SHOW!

Does anyone else wish they were living in Gay’s version of Ireland in 2020?

Another Covid-19 variant identified in Ireland