FEW crimes in the Republic over the last few decades have caused as much outrage as the summary execution of journalist Veronica Guerin by gangland criminals.

A shocked public and an appalled Government demanded that the gardaí hunt down her murderers as ruthlessly as they had hunted her.

The Taoiseach John Bruton called her murder “an attack on democracy”, and his government moved quickly to crack down on organised crime.

This was done through the introduction of the Criminal Assets Bureau, amongst other measures.

Prosecutions over her murder were eventually brought, and criminal organisations throughout Ireland were brought to their knees.

But crime flourishes once again in Dublin and variously throughout Ireland, with gangland slayings a regular, depressing occurrence.

So what is the legacy of Veronica Guerin’s campaign into Dublin’s crime underworld and her subsequent murder?

In the year that marks the 20th anniversary of the shooting of Guerin, RTÉ’s Legacy series looked back at her life, her investigative journalism, and her murder.

The documentary questioned whether her campaign —  to root out organised crime — has been honoured. Or, quite bluntly: Did Veronica Guerin die totally in vain?

In the short term after her murder, the gardaí crackdown on the drugs gangs severely disrupted Ireland’s criminal underworld.

The all-powerful Criminal Assets Bureau forced drugs overlords into taking risks, committing crimes that they would not normally have risked, and paying the price for these with lengthy prison sentences.

But when RTÉ’s Legacy considered the current state of gangland crime, particularly in Dublin, the picture was much murkier.

The situation seems to have, in large part, reverted, with the gang bosses who were rounded up in the wake of Veronica Guerin’s murder having been replaced by more vicious and ruthless criminals.

As her husband Graham Turley put it: “We had all these promises from the ministers at the time, and it was all going to be done and dusted. Twenty years down the road, we're back to stage one.”

Although a tenacious, fearless journalist, Veronica Guerin was someone who lived life to the full.

She was a happy, family woman. Her husband Graham Turley would drive her to assignations such as door-stepping suspected criminals or drugs kingpins.

Her son Cathal was named after Charles Haughey — Veronica was close to the Haughey family.

Cathal said of his mother: “My mum was a renegade, she was cool, she was fun, she was lively.”

In a poignant scene in Legacy, Cathal says he remembers being taken to his grandmother’s house on the day of the murder to be looked after.

At that point he knew nothing of his mum’s death. But there were clues that something was amiss.

“There was Lego there, nana never had toys and I wasn’t allowed to watch TV,” he says.

It was , of course, her investigative journalism that led to her murder in broad daylight on June 26, 1996.

As her friend, broadcaster Matt Cooper says in Legacy – “Businessmen might sue you but when you’re dealing with criminals, they’re going to hurt you.” And hurt her they did.

"The only place to get good information from is the crimes," said Veronica Guerin.

As crime specialist for The Sunday Independent, she was thoroughly acquainted with Dublin's seamy underworld, describing it as a "culture of violence, money and evil".

Guerin was on good terms with the gardaí, less so with the gangland bosses.

She was physically attacked on more than one occasion and received several death threats prior to her assassination on the Naas bypass on June 26, 1996. She was 37.

Veronica Guerin was born on July 5, 1959. She came from a large Donegal and Dublin family, and grew up in the Artane district of north Dublin.

She was educated by the Holy Faith nuns in Killester. She studied accountancy at Trinity College, Dublin, but soon decided that journalism was her true calling.

Nonetheless her accountancy training helped her follow the “money trail” of the underworld, as drugs money was laundered and shifted to safe havens.

but her first scoop wasn’t connected to the underworld — it was tracking the whereabouts of disgraced Bishop Eamon Casey in Ecuador. 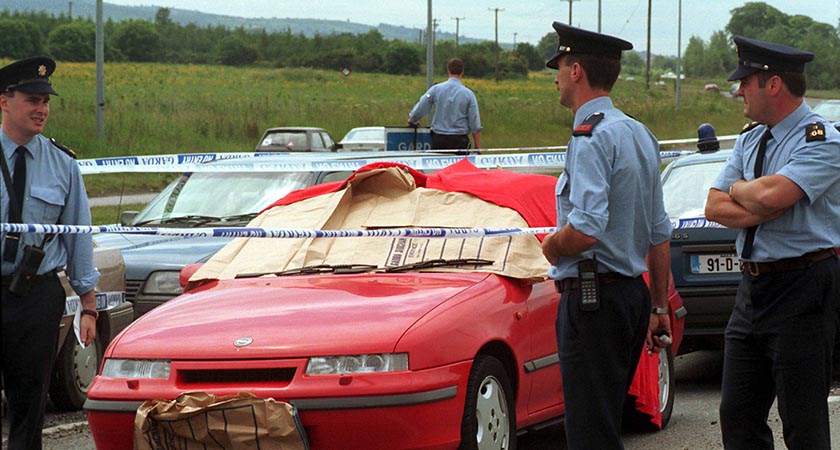 Veronica Guerin's car in the aftermath of her murder. Picture: Photocall Ireland

On 26 June 1996, Guerin stopped her Opel at traffic lights on the Naas Dual Carriageway near Newlands Cross.

A motorbike which had been hiding in a side road, pulled up beside her. The pillion passenger produced a hand gun and shot her six times.

Several members of drugs boss John Gilligan's gang were arrested in the wake of her murder.

A suspect in the case, Charles Bowden, agreed to turn State's witness, and became the first person to enter the Republic of Ireland's Witness Security Programme.

Granted immunity from prosecution for the murder of Guerin, he was the only witness to give evidence against the Gilligan gang.

Brian Meehan, 47, from Crumlin, is currently serving a life sentence in Portlaoise prison for her murder having being convicted by the Special Criminal Court in July 1999.

It was the prosecution’s case that he drove the motorcycle.

John Gilligan left Ireland the day before Guerin was murdered, bound for Amsterdam.

He was arrested a year later in Britain. After a three-year legal battle, he was extradited to Ireland on February 3, 2000.

Acquitted of Guerin's murder, he was later convicted of importing 20 tonnes of cannabis and sentenced to 28 years in prison, reduced to 20 years on appeal.