IRISH Cystic Fibrosis patients are celebrating victory after a deal was reached for the distribution of two life-changing drugs in Ireland.

The deal between Ireland's Health Service Executive and pharmaceutical company Vertex for Orkambi and Kalydeco drugs was announced by Minister for Health Simon Harris in the Dáil this week.

Cystic fibrosis (CF) is an inherited chronic disease that primarily affects the lungs and digestive system of about 1,200 children and adults in the Ireland.

A defective gene causes the body to produce a thick mucus that clogs the lungs and leads to life-threatening infections -  it is Ireland's most common genetically inherited disease. 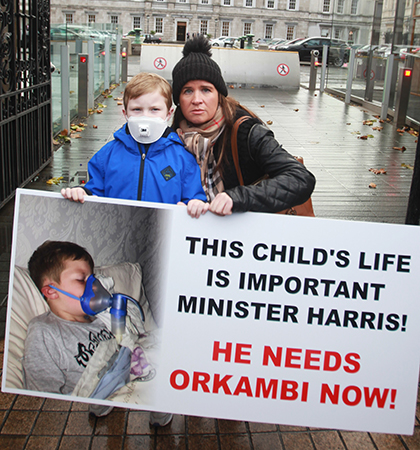 Pictured is Sam Mulan, 7),who has cystic fibrosis with his mother outside Leinster House in Dublin on April 7. Picture: Leah Farrell/RollingNews.ie)

Previous talks between the Health Service and the pharmaceutical company had slowed as the cost of Orkambi had been put at €158,000 per patient, and €390million over the course of five years.

But the National Centre for Pharmacoeconomicsthe (NCPE) in Ireland later estimated that the HSE should pay €15million a year for Orkambi, or €75million over the next five years.

A protest had been held in Dublin last week by frustrated Cystic Fibrosis patients who said the health service was not willing to fund Orkambi drugs.

As a result of a deal reached, Minister Harris said the drugs will be available from next month to Cystic Fibrosis patients across Ireland.

"The HSE and Vertex have confirmed that an agreement has been reached in principle on the commercial terms for the supply to Irish patients of Orkambi and for Kalydeco from next month and for other treatments and age cohorts following market authorisation in Europe.

"The HSE and Vertex expect the medicines to be available from the 1st of May," he said.

CFI also said the high costs of the drug will be offset "significantly" by savings in other areas.

It said: "Cystic Fibrosis Ireland recognises the very high cost of these drugs. However, the results of clinical trials demonstrate that Orkambi, slows the progression of cystic fibrosis, significantly reduces exacerbations (sudden worsening of the condition) that leads to hospitalisation and can result in a drop of lung function that is never retrieved again, reduces the dependency on other drugs used in the treatment of cystic fibrosis, including expensive antibiotics and enables a quality of life that may include part-time or full-time work or education for the individual involved, which may not have been possible before, or possible to continue to maintain."

At present Orkambi will be prescribed to 550 CF patients and Kalydeco is prescribed to 40 patients, 18 of whom are aged between two to five years old.

Cystic Fibrosis patients across Ireland took to Twitter to express the "miracle" of Orkambi and Kalydeco being approved.

So I've been up since 6 & just had to pinch myself, yep I'm no longer thinking it's a dream! Ireland has Orkambi #groupeffort #mymiracle

Orkambi to be made available in Ireland from next month! Thank goodness! Well done everyone!!

I'm rarely lost for words. My thoughts are running but my mouth is still.
Orkambi is now approved in Ireland. We have made a dream happen 💖