LIONS MANE JELLYFISH, otherwise known as giant jellyfish, have been sighted off the south Dublin coast at Sandycove and have been washing up on beaches nearby.

Warnings have been put out to swimmers and beach-goers alike who have been advised to proceed with caution.

Dun Laoghaire-Rathdown County Council have said that life guards are keeping a vigilant eye on the sand and the waters after being put on red-alert.

The jellyfish can deliver a venomous sting which despite not being fatal, can lead to several medical complications. 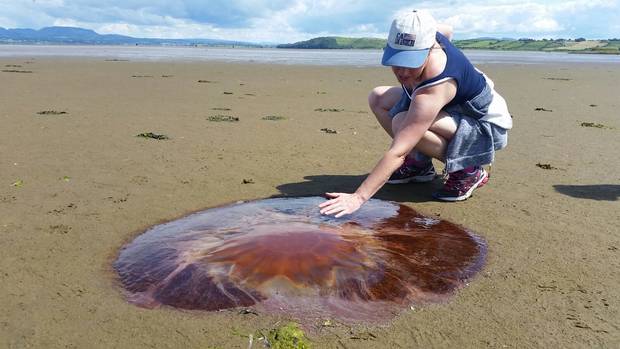 Lions Mane have been spotted off the Dublin coast

If stung, you can suffer serious symptoms including nausea, vomiting, localised pain, redness of the skin and respiratory problems, and you should seek immediate medical attention.

Vinegar can often be used to counteract the sting, but due to the size of the creature and its tentacles, this often proves insufficient for Lions Mane stings.

Victims are advised to immerse the affected area in 45 degree hot water for around 40 minutes in order to curb the pain and the swelling.

Incredibly, Lions Mane jellyfish have been known to grow up to 7 feet in diameter, and even more remarkably, their tentacles have been recorded as growing up to 120 feet long.

Due to this, it’s argued that they’re the longest creatures to have ever lived. To put the size of their tentacles into perspective, an average adult blue whale measures in at around 85 feet.

Enter the water at your peril. Thankfully for us, it isn’t exactly ‘beach weather’ outside anyway.