A TRIPLE funeral has taken place in the West Midlands for three victims of the Tunisia shooting from the same family.

Joel Richards, 19, his 78-year-old grandfather Patrick Evans and his uncle Adrian Evans, 49, were mourned by their family and friends and hundreds of members of the local community.

People lined the streets of Wednesbury this afternoon as the three coffins arrived at the Holy Cross Church for the midday funeral service.

James Connollys GAA club, of which Joel was a member, provided a guard of honour as their teammate made his final journey from the church.

Joel was a talented GAA player, despite having no Irish roots. He and his younger brother Owen, 16, played with the club from a young age.

The brothers’ passion for GAA spilled over into the rest of the family, with Patrick and Adrian even flying to Kildare in 2010 to watch Joel play in goal for the club in a tournament.

Floral tributes have been laid at the entrance to the church for Adrian and Patrick Evans and Joel Richards pic.twitter.com/ffzMZTZOy1

Joel, a sports fanatic, was also a talented referee. His love of sport carried over into his career ambitions, when he went to the University of Worcester to study sports science.

The gathered crowds heard about Joel’s “infectious smile” and how he could have went on to referee Premier League games, such was his talent.

The service finished with the crowds hearing about the special bond the three had. After the service, the remains of Joel and his grandfather and uncle were cremated.

Joel, Patrick and Adrian were killed in the seaside resort of Sousse on June 26 when a gunman opened fire on the beach, killing 38 people. Owen managed to survive the attack with just a minor injury, where a bullet grazed his shoulder.

A picture was shown at today’s funeral of Joel with his grandfather and uncle on board the plane to Tunisia last month, on what was supposed to be a “jolly boys outing”.

Joel is survived by his mother Suzanne, who lost her son, father and brother in the tragic incident. 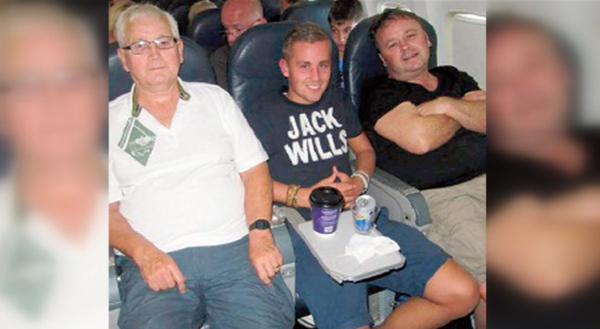 This picture shows Patrick, Joel and Adrian on the plane to Tunisia. Picture: Twitter/@bbchw