US PRESIDENT Donald Trump appeared to confuse Ireland with the UK yesterday during a meeting with Taoiseach Leo Varadkar.

Mr Varadkar, who is visiting the White House as part of the annual tradition betwen the two countries in the run-up to St Patrick's Day, was speaking at a press briefing alongside the US president when the subject of coronavirus came up.

"The president has excluded Ireland from the [European to United States] travel ban," Mr Varadkar said, "And one of the things we have in Ireland is the CBP, American Border Security in Ireland.

"I went through it myself yesterday and they were asking the right questions, whether people had been to China and things like that so that puts it in a slightly different--"

President Trump then interrupted by saying "One of the reasons the UK, basically, has been.... it's got the border, it's got very strong borders, and they're doing a very good job. They don't have very much infection at this point and hopefully they'll keep it that way."

Donald Trump thinks Ireland is in the UK 🤦‍♂️ https://t.co/MCPVjHrFyY

It appears that the US president believes that Ireland is in the United Kingdom, which might explain why Ireland has also been exempted from the European travel ban which is due to be implemented at midnight on Friday.

Of course, Ireland famously does not have "very strong borders" and has spent the best part of the past three years fighting to ensure there would be no return to a hard border on the island after the UK left the European Union.

As for the claim that the UK "doesn't have very much infection at this point", the United Kingdom has 596 confirmed cases and ten deaths.

The Republic of Ireland has 70 cases, and the island has 90 in total.

The Trump administration also came under fire earlier yesterday when they were accused of flying the Italian flag to greet the Irish leader-- you can read about that here.

Mr Varadkar did not correct Mr Trump, but he did make this face: 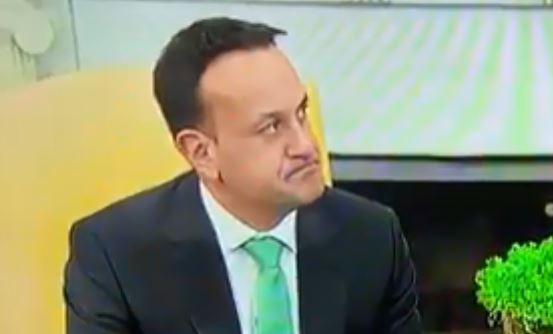