SHOCKING footage has emerged of a funeral official heartlessly preventing a son from comforting his grieving mother in order to ensure social distancing regulations were adhered to.

The heartbreaking video, from a funeral in Milton Keynes, sparked a furious online backlash with people slamming the "ridiculous" Covid-19 rules.

In the footage, a woman attending her late husband's funeral is consoled by her son, who moved his chair to sit next to her during the service, only to be scolded by a funeral official for breaking social distancing rules.

"You're going to have to put your chairs back I'm afraid," the official can be heard saying.

"You can't move your chairs. You've been told."

Current rules dictate that no more than 30 people are allowed to attend a funeral and everyone in attendance must be kept two metres apart.

Despite this, it's understood that the son was in his mother's 'support bubble', and was left "absolutely heartbroken" by what transpired.

"I can sit in a restaurant, I can sit in a pub, I can live at her house, I can travel in a limousine to the crematorium with six people," he told miltonkeynes.co.uk.

"When I want to give my mum a cuddle at dad's funeral, a man flies out mid-service shouting stop the service and makes us split. 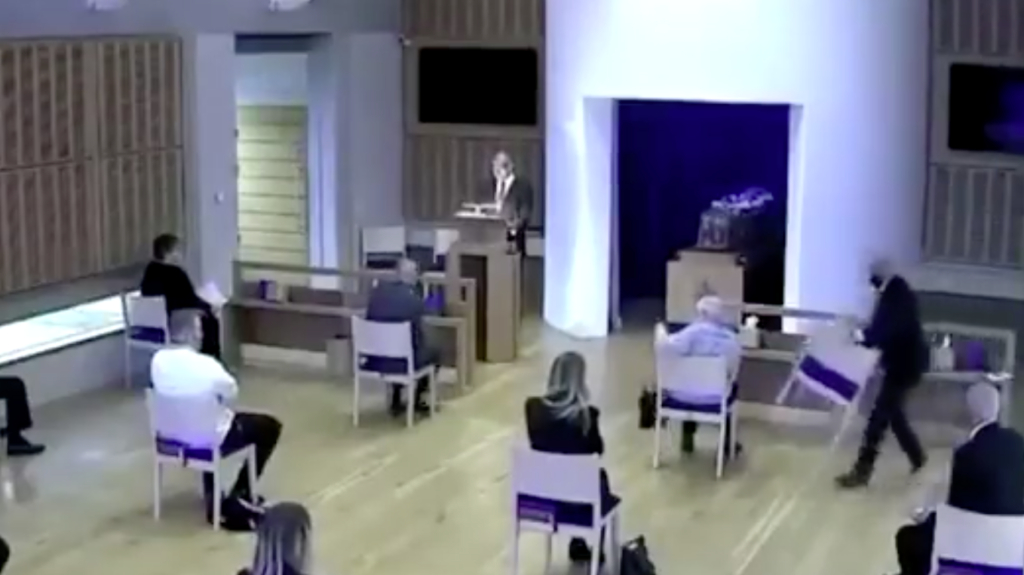 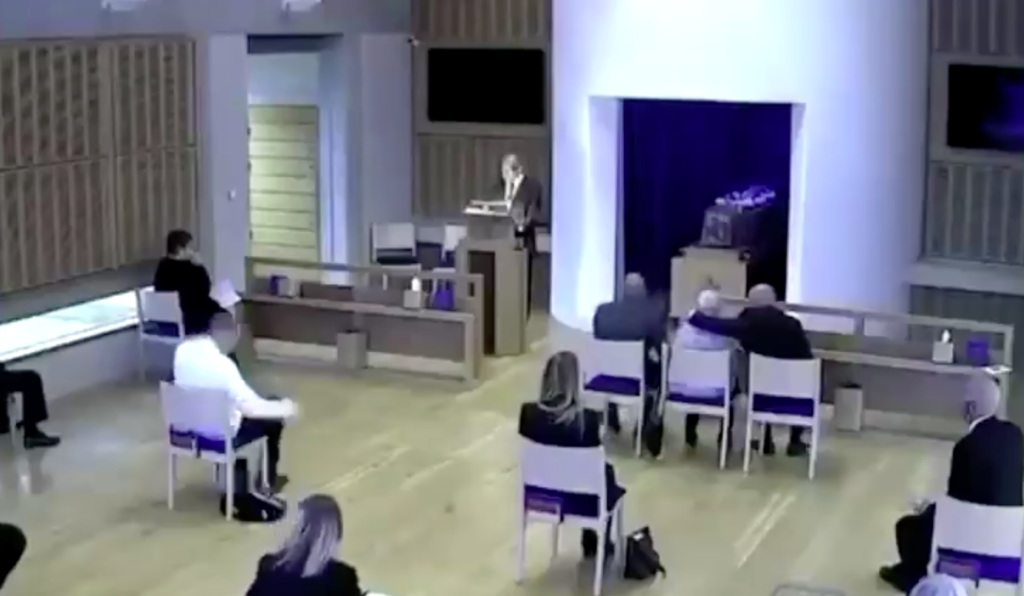 "It scared my daughter and shocked everyone in the room. This is not how funerals should be and with the guidelines in place for pubs, bars, public transport etc, how this can carry on at funerals is beyond belief.

"It was a devastating day made even worse."

Conservative commentator Darren Grimes posted the video online, writing: "It really does highlight the cruel lack of humanity and decency in the way in which we’re forced to live our lives today." 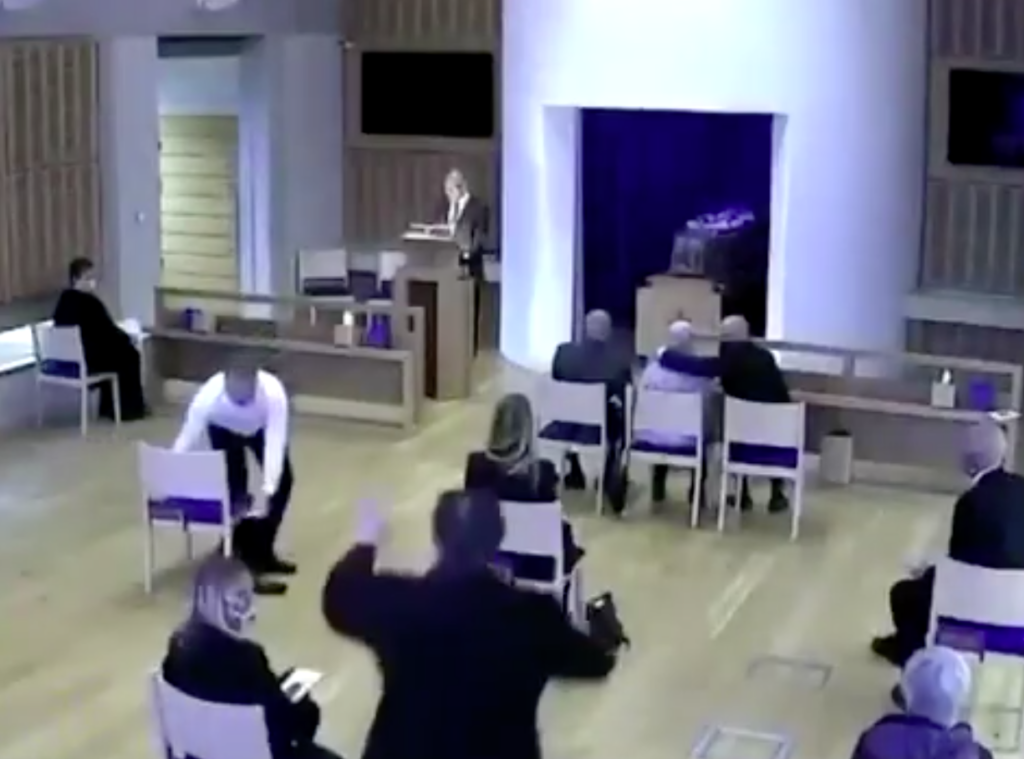 But a funeral officer puts a stop to it, ordering the two men to move their chairs back

His thoughts were echoed throughout social media.

"Tragic, cruel and evil... this is making me very angry," wrote one Twitter user.

"Enough is enough, we are human. Where is our humanity when you see this? no more. My mate's mum died this morning, massive family now so many will not be able to go to her funeral. Real sad and too much," said another. 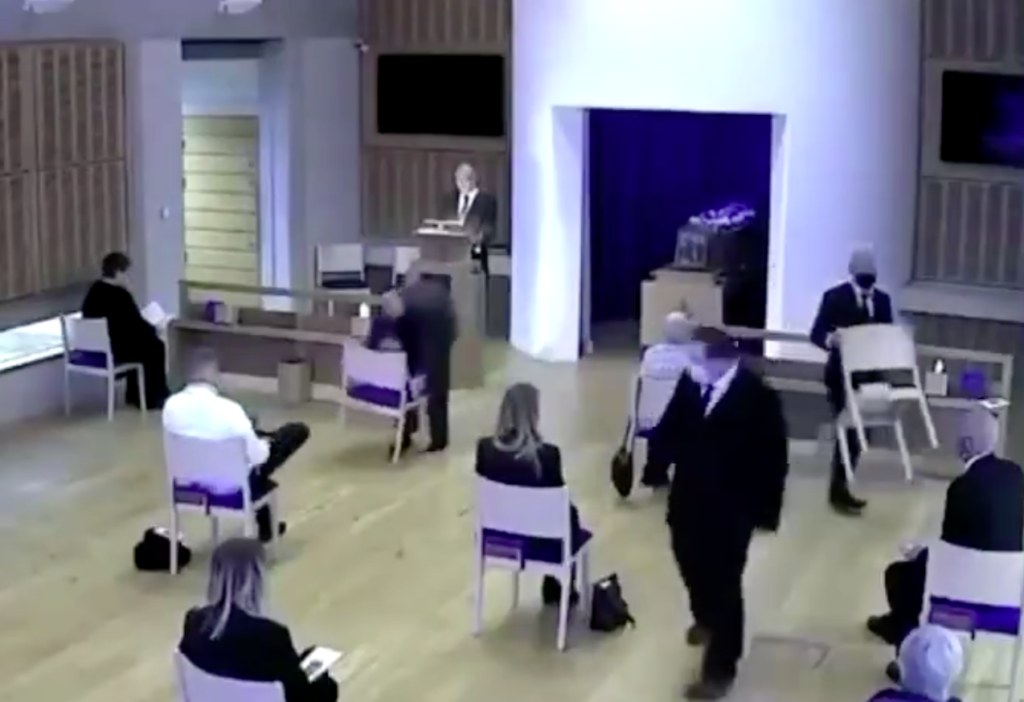 Mr Grimes went on to say that he didn't blame the funeral officer, but the "heartless" rules laid down by the Government.

"He is following the rules and regulations that ensure he doesn't lose his job and livelihood. I blame the cruel and heartless guidance that says they can comfort their mother sat side by side on public transport but not at a funeral."