BRENDAN O’Carroll has told of his “terror” as Hurricane Irma struck his Florida home “like a 747 jet” this week.

The huge storm – one of the largest ever recorded in the Atlantic – forced the evacuation of 6.5million people from the Sunshine State and devastated a number of islands across the Caribbean.

Brendan, who lives near Orlando, had been writing two Mrs Brown’s Boys Christmas specials at his home near Orlando when the 140mph winds struck.

The 61-year-old said he prepared for the worst as Irma “battered” his home for almost 15 hours.

“I’ve had many a stormy night in Finglas with high winds and the rain hopping off the windows. But Irma battered us for nearly 15 hours,” he told the Irish Sun.

“At one point it got so bad I went looking for my red shoes to join Dorothy in Oz.”

The Dubliner explained that he could have waited the storm out in Ireland but decided to remain as the storm wasn’t predicted to hit his area so severely.

He said his family at home had tried to persuade him to get out but by the time he realised Irma was heading his way, it was already too late.

“My family wanted us to leave but we initially thought the hurricane was going up the east coast about 100 miles from us,” he said.

“But by the time it changed course to the west and inland, all the airports were closed.

“Roads going north had a 50-mile gridlock so the only thing to do was sit tight and hope for the best.” 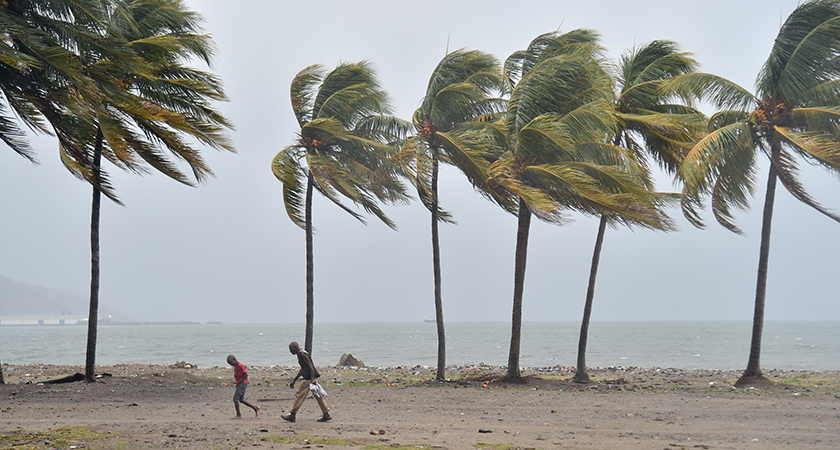 O’Carroll said the ferocious winds were so deafening that he couldn’t even hear himself speak.

He said: “The best description was like hearing a huge train coming at your house, it’s getting closer and closer and louder, and by the time it reaches the house, the roar is so loud that’s it’s now a 747 jet.

“We were terrified. One of those times that just when you thought it couldn’t get any worse it did.

“Like getting punched continuously and just when you think it’s stopped you realise they’re just changing fists.

“The weird thing is the way the hurricane just hangs there, roaring for hours. It’s so loud, even normal conversation are impossible.

“You’re looking out the window at trees bent over, their tops touching the ground. And it’s really nerve wracking because it’s so dark.”

He added: “We were very lucky considering we had the eye hit us directly and when you see how some unfortunate families lost everything.

“We feel blessed. Damage-wise, the garden is cleared of trees and plants, but otherwise no significant damage other than a few roof tiles lost.”

At least 79 people lost their lives across the Caribbean and a number of southern US states before Hurricane Irma finally dissipated on Tuesday.

The killer storm has left millions of Floridians without water and wrought a massive $62 billion in damage.