Johnny Sexton of Leinster celebrates with Hugh O'Sullivan following their victory during the Heineken Champions Cup semi final match between Leinster Rugby and Toulouse at the Aviva Stadium. (Photo by Dan Mullan/Getty Images)

The majestic out half led by example as his side cruised to victory against a disappointing Toulouse at the Aviva on Sunday.

He kicked – for the most part – with precision and any fears that his extended convalescence since the Six Nations might impact on his high standards were soon allayed.

First half tries from James Lowe and Luke McGrath put the Blues in the box seat early on and -despite an improved performance after the interval – Toulouse never looked like derailing Leinster’s momentum. 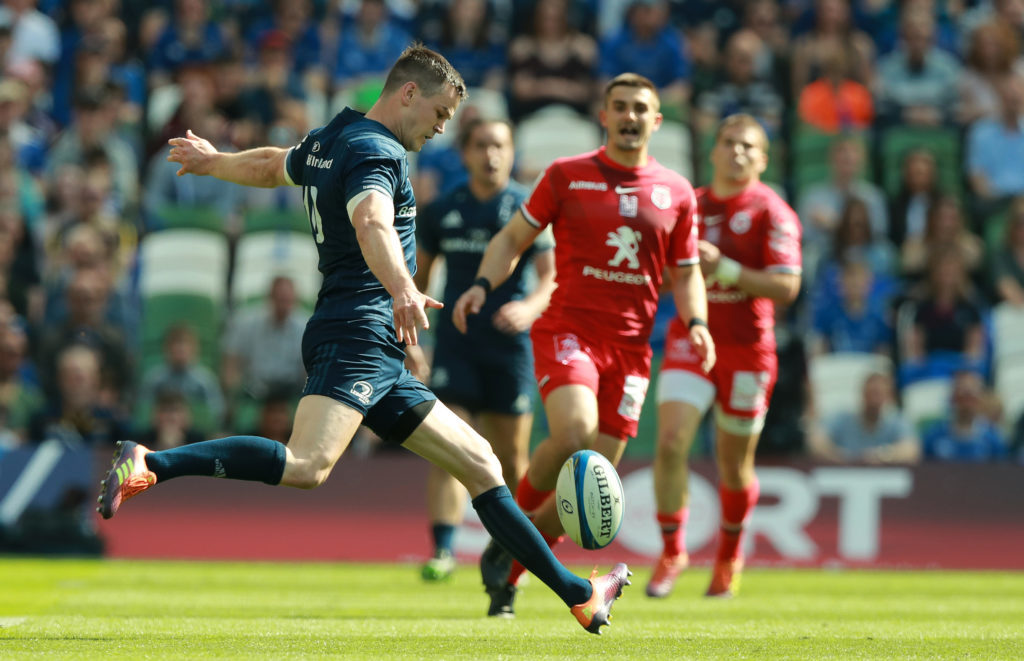 Johnny Sexton of Leinster attempts a long range drop goal during the Champions Cup Semi Final match between Leinster Rugby and Toulouse at the Aviva Stadium on April 21, 2019 in Dublin, Ireland. (Photo by David Rogers/Getty Images)

“To keep building on the lead was very impressive by us,” said Sexton after the match.  We knew they can score tries out of nowhere. It was something we spoke about at half time.

“To go to another Heineken Cup Final is dream come true.  I never thought I’d play in one, nevermind five. It’s very special, but we don’t play for finals, we play to win things. So hopefully we can go one step further.”

Leo Cullen’s men now have the chance to make history when they face Saracens in Newcastle on May 11. Sexton is only too aware of the size of the task at hand and what a monumental effort it will take to get over the line against an English side who look like they are kicking into gear at just the right time.

“We know Toulouse had four stars on their jersey.  But at the same time, Sarries have got two and if they get another one, they’ll be closely behind us,” said Sexton

“They are a fantastic side.  We watched how they dominated Munster – and we know how tough a side Munster are.

“We are going to be up against it, but we’ll prepare now for the biggest battle of our careers.”

Ireland's most watched YouTube videos of 2018 have been revealed