'We're at war with the virus, not with each other': Biden calls for unity in Thanksgiving speech

JOE BIDEN has called for the country to unite and work together to defeat the coronavirus in a powerful Thanksgiving speech.

The President-elect was speaking yesterday ahead of America's most important holiday where he called for unity between people in the face of the growing threat of Covid-19.

Acknowledging the country finds itself facing "a long, hard winter", he paid tribute to the 260,000 people who have died and paid his condolences to those who have lost loved ones.

"I know the country has grown wary of the fight, " he said "We need to remember we're at war with the virus, not with one another, not with each other." 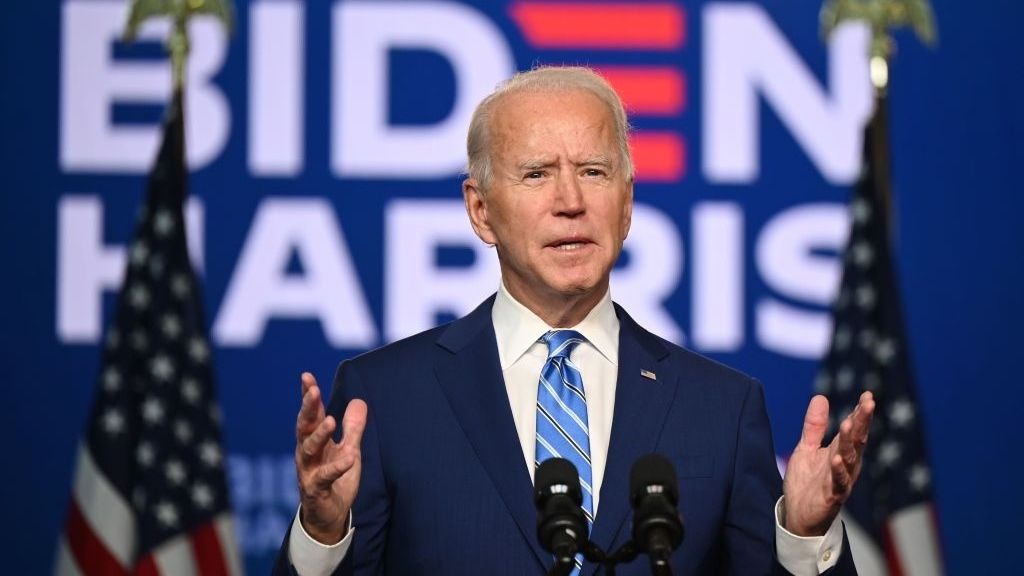 "There’s real hope, tangible hope. So, hang on. Don’t let yourselves surrender to the fatigue." (Getty)

He called for people to redouble their efforts and remember "we're all in this together".

With the Covid-19 pandemic ravaging the country, people are being urged not to have large family gatherings this year, something Mr Biden said he accepts is difficult; his family will not travel to each other for Thanksgiving this year for the first time since his son died.

"This year, we’re asking Americans to forego so many of the traditions that we’ve long made this holiday, which made it so special," he said.

"For our family, for 40 some years, we’ve had a tradition of travelling over Thanksgiving, a tradition that we’ve kept every year, save one. The year our son Beau died. But this year we’ll be staying home."

"Many local health systems are at risk of being overwhelmed," he stated plainly as he urged people to restrict the amount of people they see this holiday season.

"That’s the plain and simple truth. Nothing made up. It’s real. And I believe you always deserve to hear the truth."

The President-elect promised that his administration would work to tackle the virus and see it come to an end, by testing, isolating and supplying PPE until a vaccine is ready in late December or early January, and stressed that following social distancing rules or wearing masks is not a political statement.

"I’m hoping the news of the vaccine will serve as an incentive to every American, to take these simple steps to get control of the virus," he said.

"There’s real hope, tangible hope. So, hang on. Don’t let yourselves surrender to the fatigue, which I understand it is real fatigue. I know we can and we will beat this virus.

"America’s not going to lose this war. We’ll get our lives back. Life is going to return to normal, I promise you. "