Who scored against England and against Italy – in 2 of the most famous Goals for Ireland – of All Time?

As the Irish in London, Leeds, Manchester and Birmingham watch their local colleagues and friends support England against Italy, the Irish in Milan, Padua, Rome and Florence join their friends to watch Italy face England – in the UEFA Euro 2020 Final at Wembley on Sunday kickoff 20:00 (Manchester)/ 21:00 (Rome).

We recall, two of Ireland’s most famous goals ever scored -  both by the same footballer - against  England and against Italy.

Against England, at Euros 1988, Ireland played in its first ever Senior Finals in Stuttgart Germany.

A third of a century ago, and it is still fondly remembered. 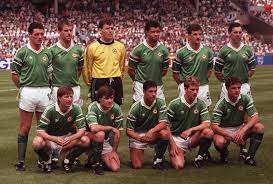 Managed by the charismatic England legend Jack Charlton, Ireland withstood a bombardment of shots from England’s Lineker and co, but Packie Bonner and his defence kept the sheet clean.

With a memorable assist from Liverpool clubmate John Aldridge, Ray Houghton struck and headed into the English net – to record a legendary 1-0 win for the Republic of Ireland over England.Songs have been written, memories made, never to be forgotten.

Re-live that magic moment here, voted by the RTE viewers at the best Irish football result

Move on 6 years, and Ireland qualified for the World Cup 1994 in the USA.

Ireland were drawn against Italy in the first game – against the same team Ireland had lost to, 4 years previously in Rome. Having transferred to Aston Villa from Liverpool in 92, Ray Houghton was still starring in the Irish squad for the 1994 FIFA World Cup in the United States and was once again the goalscoring hero in a shock victory Ireland 1 - 0 Italy .

At Giant’s Stadium, New Jersey, the Irish fans filled most of the stadium, so much so, it felt like a Home match. Against all odds, in the 11th minute, Ray Houghton looped a stunning shot over the advancing Italian keeper, to send most of the 80,000 fans into wild celebration. The Irish again defended heroically to record a famous shock victory.

Ray Houghton scored arguably Ireland’s 2 most famous goals ever, against this year’s finalists, England and Italy. 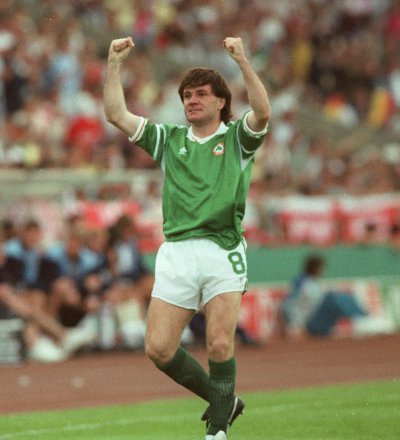 He earned his first cap in Jack Charlton's first match as manager, against Wales in a friendly international at Lansdowne Road on 26 March 1986. He went on to play 73 times for Ireland from 1986–1997, scoring 6 goals, none more special than these 2 against Italy and England.